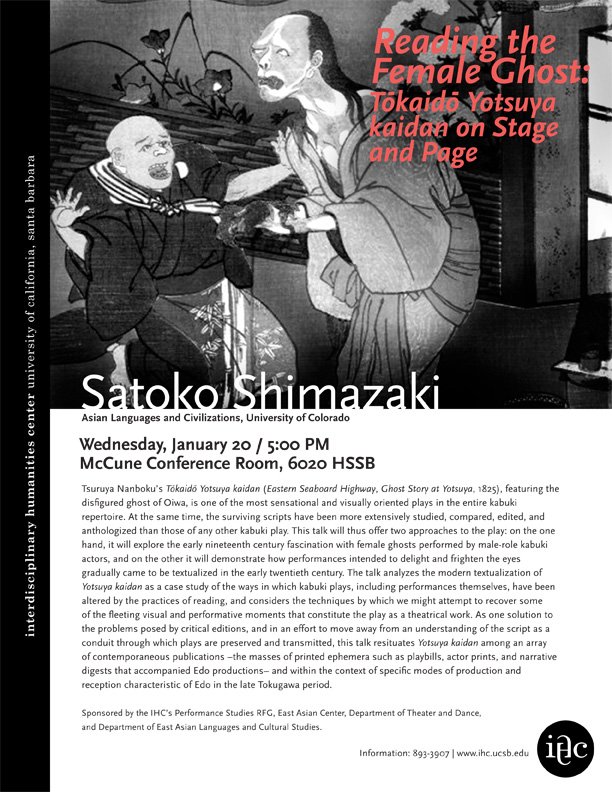 Tsuruya Nanboku’s Tōkaidō Yotsuya kaidan (Eastern Seaboard Highway, Ghost Story at Yotsuya, 1825), featuring the disfigured ghost of Oiwa, is one of the most sensational and visually oriented plays in the entire kabuki repertoire. At the same time, the surviving scripts have been more extensively studied, compared, edited, and anthologized than those of any other kabuki play. This talk will thus offer two approaches to the play: on the one hand, it will explore the early nineteenth century fascination with female ghosts performed by male-role kabuki actors, and on the other it will demonstrate how performances intended to delight and frighten the eyes gradually came to be textualized in the early twentieth century. The talk analyzes the modern textualization of Yotsuya kaidan as a case study of the ways in which kabuki plays, including performances themselves, have been altered by the practices of reading, and considers the techniques by which we might attempt to recover some of the fleeting visual and performative moments that constitute the play as a theatrical work. As one solution to the problems posed by critical editions, and in an effort to move away from an understanding of the script as a conduit through which plays are preserved and transmitted, this talk resituates Yotsuya kaidan among an array of contemporaneous publications — the masses of printed ephemera such as playbills, actor prints, and narrative digests that accompanied Edo productions — and within the context of specific modes of production and reception characteristic of Edo in the late Tokugawa period.