Posted at 12:12h in Fellows Blog by Admin

Think of the last time you visited a museum. Did you give any thought to the appearance of the artifacts on display? If visiting an art museum, this question was probably at the center of your experience. But what if that visit was not to an art museum but a transportation museum? Did you ever think about why an automobile, aircraft, or piece of railroad equipment in its livery was painted a certain way?

This is a story about correcting one such error.

In 2022 the Nevada State Railroad Museum in Carson City will celebrate the sesquicentennial completion date of the Virginia and Truckee Railroad (hereafter V&T) that served the silver mines of the Comstock Lode operating between Reno, Carson City, and Virginia City. Much of the museum’s collection originates from this railroad. One of the only pieces of the museum’s collection present for the railroad’s completion was V&T Coach/Caboose 8 (originally V&T Caboose 1). It is likely that this artifact will be a centerpiece at the celebratory events. However, we know that the current exterior paint schematic of a canary yellow body with light brown accents (see above photo) is not only inappropriate for the timeframe the car’s current physical exterior appearance presents, but based on extant records, the car never would have been painted in this color combination. How did we get here?

Like many museums around the world, the Nevada State Railroad Museum utilizes volunteers to accomplish many tasks that would otherwise be difficult to achieve due to limited staffing hours and increasingly tight budgets. For transportation museums, like the railroad museum, thankless time-consuming tasks like painting a coach are one of the ways volunteers can lend a helpful hand. Unfortunately, some choose to run before walking. In Carson City, the result was identifying Coach/Caboose 8 needed a new paint job, acquiring paint donations, and subsequently painting the artifact before a thorough feasibility and historical accuracy review was completed.

The intention was good, but the results were not. With livery that did not match the car’s physical appearance, problems arose about how to properly interpret the car. The yellow and brown scheme dated to the late 19th and early 20th centuries on the railroad, yet the car’s physical appearance was much later in its history, as I will describe below. Furthermore, because the car was never painted in these colors, it challenged the credibility of the museum to appropriately restore, refurbish, and interpret the artifacts within its collection.  The incorrect paint job accelerated the need to revisit the coach’s history and determine how best to interpret the piece to the public.

When originally constructed in 1869, Coach/Caboose 8 had side baggage doors at the front of the car. These doors were removed in 1921 when the car was put into maintenance-of-way service as a cook/diner car for the tunnel crews on the railroad. This is the earliest possible date for proper interpretation of the artifact, as the current exterior configuration of the coach originates in this period with the doors removed. Given that the car was used as a construction car and later as living quarters for one of the railroad’s section chiefs until 1945, the current interior configuration with seats for revenue passenger service would not match an exterior paint schematic dated between the years of 1921 and 1945.

In the spring of 1945, the Virginia and Truckee’s last general manager, Gordon Sampson, initiated a “back-to-rails” program that re-implemented regular passenger train service along the route that had been curtailed because of declining revenue and ridership. Nevada had long celebrated the day it had been admitted to the Union on 31 October 1864, but Nevada Day celebrations had been suspended during the Second World War. In 1945 these festivities resumed, and Sampson suggested to members of the Carson City Lion’s Club that they invite their counterparts from Reno to join them for the festivities in Carson City via the railroad.

As part of this outreach, Sampson offered to refit the former caboose turned construction car into a club car—one that contained a bar and gaming tables—for the excursion. The car was repainted at this time and lettered as “V.&T. Club Coach” along the headboard. The car was temporarily named for the infamous Comstock courtesan Julia Bulette (misspelled “Julia Bullette” when painted) in bold red letters on the side paneling under the windows. The interior of the car had a small bar in the former baggage compartment, sawdust covering the floor, and three card tables in the passenger compartment. The car carried this name and configuration for the Nevada Day excursion on 27 October 1945, when it was at the rear of the consist pulled by V&T locomotive 25.

Following this event, the car was further rehabilitated with the Julia Bulette name removed but “V.&T. Club Coach” lettering remaining. Passenger seats were re-installed in the coach for the first time since 1915. Two years later, the car was sold in this configuration to Metro-Goldwyn-Mayer in the autumn of 1947. The Nevada State Journal of 30 August 1947 reported the “Julia Bullette [sic], most famous of the yellow and green bedecked coaches…” had been sold, indicating the coach had been painted in the post-war yellow and green schematic of passenger cars during this era. It is also worth noting the irony here that contemporaries viewed this as the most famous of the V&T cars, yet the car no longer sports the yellow and green paint job they associated it with. 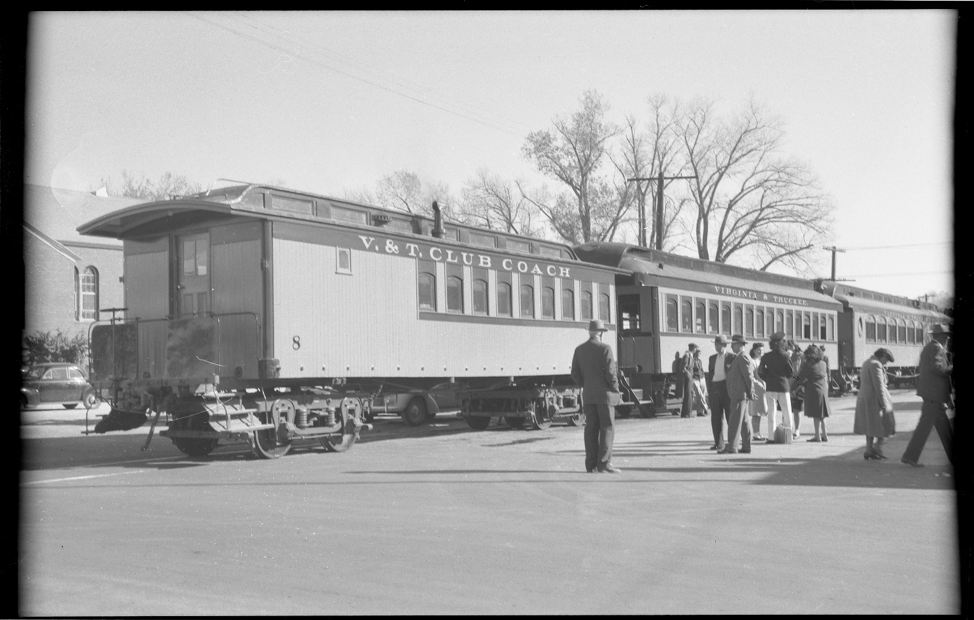 The Reno Gazette Journal for 2 September 1947 includes a photograph of the coach with trucks removed loaded on a Southern Pacific flatcar for transportation to Culver City, California. This photo, along with others from the museum’s Stanley Palmer collection (see photo above) provide a basis from which to reconstruct the appropriate paint schematic. Though these photos are black and white, based on the known yellow and green paint schematic common to this period evident in other photographs, paintings, and maintenance records, we can surmise that the body of the car would have been painted yellow, with the letterboard, clearstory, corner posts, window frames, and drip sill painted green (see photo below). Lettering was in a large bold font with “V. & T. Club Coach” centered in yellow. The lettering is much larger than the crisp font more common to the railroad. The car’s number 8 is positioned at the lower front of the coach. The number is in a darker color paint, and given known paint schematics, we can surmise this was likely red. The trucks, handrails, and mud boards were painted black. 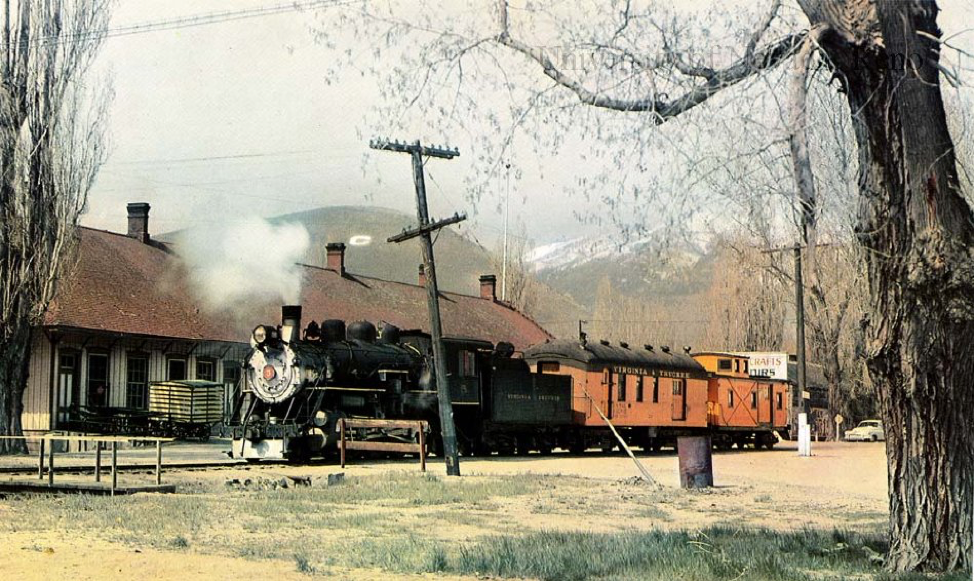 The yellow and green “Club Coach” paint and lettering scheme is the most historically accurate representation of the car in its present exterior and interior configuration. While the coach was referred to in all newspaper articles in 1947 as the “Julia Bullette,” and though many individuals continue to refer to the coach by this name, the car only carried this name for the single excursion on 27 October 1945, making it a relatively minor event in the car’s history. The “Club Coach” lettering will allow this story to be incorporated into interpretation while omitting the name in paint. Painting the car in a “last-day” paint schematic (the livery it carried on its last day of operation) allows for broader interpretation covering the artifact’s storied history and various jobs during its 78-year service life on the Virginia and Truckee Railroad.

The story is fascinating, but why focus so much attention and effort on a simple paint job? The core mission of the Nevada State Railroad Museum is “educating visitors and the public about Nevada’s railroad history.” The livery of railroads not only marks which company a particular artifact operated on, but as the history of Coach/Caboose 8 shows, different paint schematics were used at different points in time on each railroad. If trying to interpret the mid-20th century, it would be inappropriate to portray and paint an artifact in its late-19th-century appearance. Paint is not only important for ensuring the accuracy of transportation museum exhibits but is a part of the artifact’s history creating further points of interpretation. In short, paint is part of the historical narratives told by the Nevada State Railroad Museum.

There is a further educational mission that is also achieved by a “last-day” paint scheme. Currently, much of the museum’s collection is restored to or painted in a way that interprets a period around the late-19th and turn-of-the-20th-century eras. No artifact in the collection interprets the post-war period on the V&T. Restoring Coach/Caboose 8 to its 1947 appearance allows the museum to broaden its educational and interpretive abilities. It allows a point of entry to discuss the V&T and how it and other small, short line railroads operating in Nevada struggled to remain solvent following the war.

Like many other pieces in the museum’s collection, Coach/Caboose 8 survives today because it was sold to a movie studio and used in the production of western films. It was shipped to MGM Studios in its “last-day” livery where it was re-painted repeatedly over the course of its movie career based on the needs of the studio. With so many different paint jobs, traditional restoration work sanding down through different layers of paint to track the painting history of the car became nearly impossible. Repainting the car provides the museum additional opportunities to talk about Hollywood’s role in saving artifacts like Coach/Caboose 8 and to inform the public about the restoration process and how museum staff and volunteers ultimately arrive at a point of interpretation.

Having arrived at a historically accurate representation and narrative to inform interpretation for visiting guests, the only thing remaining is to now paint the car. If all goes well, you should be able to view and take a ride on this piece of history Independence Day weekend 2022.