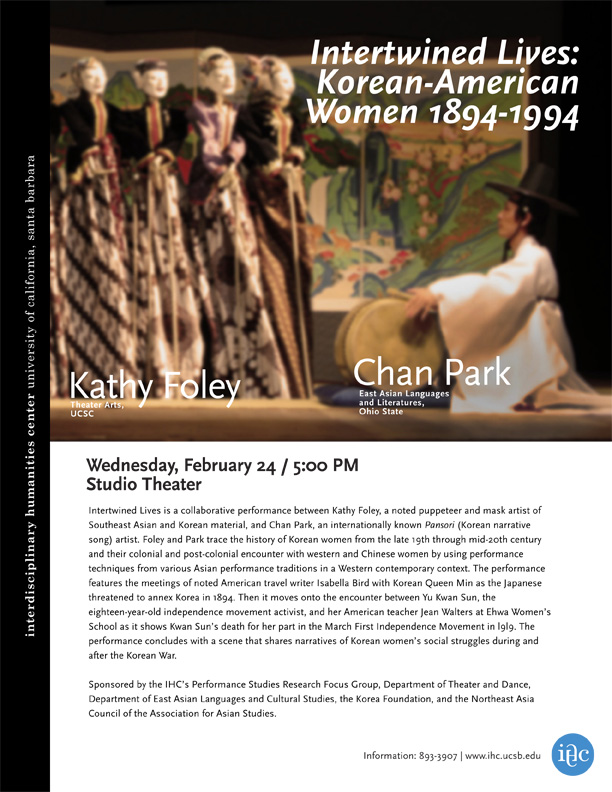 Intertwined Lives is a collaborative performance between Kathy Foley, a noted puppeteer and mask artist of Southeast Asian and Korean material, and Chan Park, an internationally known Pansori (Korean narrative song) artist. Foley and Park trace the history of Korean women from the late 19th through mid-20th century and their colonial and post-colonial encounter with western and Chinese women by using performance techniques from various Asian performance traditions in a Western contemporary context. The performance features the meetings of noted American travel writer Isabella Bird with Korean Queen Min as the Japanese threatened to annex Korea in 1894. Then it moves onto the encounter between Yu Kwan Sun, the eighteen-year-old independence movement activist, and her American teacher Jean Walters at Ehwa Women’s School as it shows Kwan Sun’s death for her part in the March First Independence Movement in l9l9. The performance concludes with a scene that shares narratives of Korean women’s social struggles during and after the Korean War.

Sponsored by the IHC’s Performance Studies RFG, Department of Theater and Dance, Department of East Asian Languages and Cultural Studies, the Korea Foundation, and the Northeast Asia Council of the Association for Asian Studies.