Urban Ecology and the Imagination of the Future

Home > Upcoming Events  > Urban Ecology and the Imagination of the Future

23 Apr Urban Ecology and the Imagination of the Future

Posted at 09:42h in Upcoming Events, IHC Series, The Anthropocene: Views from the Humanities by Admin 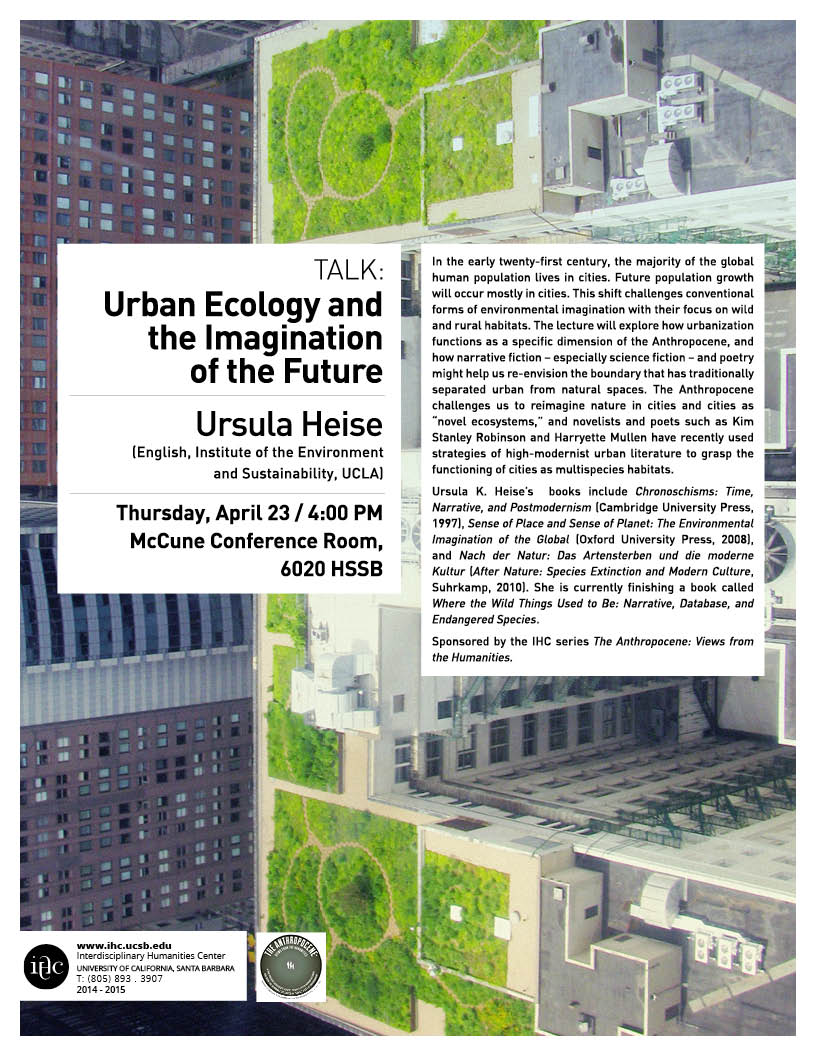 In the early twenty-first century, the majority of the global human population lives in cities. Future population growth will occur mostly in cities. This shift challenges conventional forms of environmental imagination with their focus on wild and rural habitats. The lecture will explore how urbanization functions as a specific dimension of the Anthropocene, and how narrative fiction – especially science fiction – and poetry might help us re-envision the boundary that has traditionally separated urban from natural spaces. The Anthropocene challenges us to reimagine nature in cities and cities as “novel ecosystems,” and novelists and poets such as Kim Stanley Robinson and Harryette Mullen have recently used strategies of high-modernist urban literature to grasp the functioning of cities as multispecies habitats.

Ursula K. Heise teaches in the Department of English and at the Institute of the Environment and Sustainability at UCLA. She is a 2011 Guggenheim Fellow and served as President of ASLE (Association for the Study of Literature and the Environment) in 2011. Her research and teaching focus on contemporary literature, environmental culture in the Americas, Western Europe and Japan, literature and science, globalization theory, and media theory. Her books include Chronoschisms: Time, Narrative, and Postmodernism (Cambridge University Press, 1997), Sense of Place and Sense of Planet: The Environmental Imagination of the Global (Oxford University Press, 2008), and Nach der Natur: Das Artensterben und die moderne Kultur (After Nature: Species Extinction and Modern Culture, Suhrkamp, 2010). She is editor of the book series, Literatures, Cultures, and the Environment with Palgrave-Macmillan and co-editor of the series Literature and Contemporary Thought with Routledge. She is currently finishing a book called Where the Wild Things Used to Be: Narrative, Database, and Endangered Species.