To Grow or Not to Grow: Post-Recession Challenges Facing UC

Home > Series  > The Value of Care  > To Grow or Not to Grow: Post-Recession Challenges Facing UC

18 Feb To Grow or Not to Grow: Post-Recession Challenges Facing UC 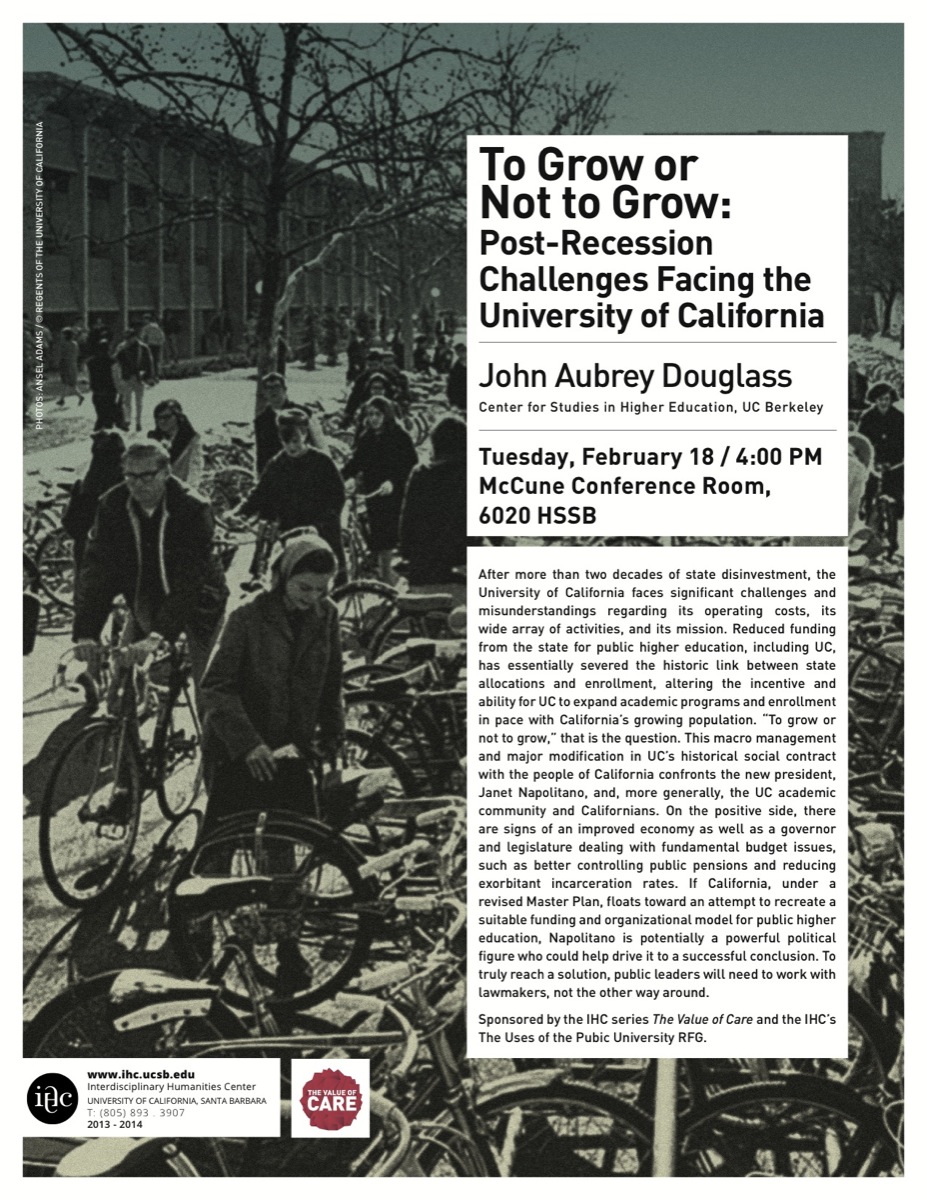 After more than two decades of state disinvestment, the University of California faces significant challenges and misunderstandings regarding its operating costs, its wide array of activities, and its mission. Reduced funding from the state for public higher education, including UC, has essentially severed the historic link between state allocations and enrollment, altering the incentive and ability for UC to expand academic programs and enrollment in pace with California’s growing population. “To grow or not to grow,” that is the question. This macro management and major modification in UC’s historical social contract with the people of California confronts the new president, Janet Napolitano, and, more generally, the UC academic community and Californians. On the positive side, there are signs of an improved economy as well as a governor and legislature dealing with fundamental budget issues, such as better controlling public pensions and reducing exorbitant incarceration rates. If California, under a revised Master Plan, floats toward an attempt to recreate a suitable funding and organizational model for public higher education, Napolitano is potentially a powerful political figure who could help drive it to a successful conclusion. To truly reach a solution, public leaders will need to work with lawmakers, not the other way around.

John Aubrey Douglass is Senior Research Fellow at the Center for Studies in Higher Education (CSHE) at the University of California – Berkeley.  He is the co-editor of Globalization’s Muse: Universities and Higher Education Systems in a Changing World (Public Policy Press, 2009), and the author of The Conditions for Admissions and The California Idea and American Higher Education.

Among the research projects he co-founded and remains the Berkeley Principal Investigator is the Student Experience in the Research University (SERU) Consortium – a group of major research universities in the US and internationally, with members in China, Brazil, South Africa, the Netherlands and Russia. He is also the editor of the Center’s Research and Occasional Paper Series (ROPS), sits on the editorial board of international higher education journals in the UK, China, and Russia, and serves on the international advisory boards of a number of higher education institutes.

Current research interests are focused on comparative international higher education, including the influence of globalization, the role of universities in economic development, science policy as a component of national and multinational economic policy, strategic issues related to developing mass higher education, and studies related the SERU Consortium survey data that assesses the student experience in major research universities.

Sponsored by the IHC series The Value of Care and the IHC’s The Uses of The Public University RFG.

Click here to listen to a recording of John Aubrey Douglass’ talk for the IHC’s Value of Care series.

The Uses of the Public University RFG