The Muslim Scare in Europe: Hysteria or Threat

Home > Endowments  > The Muslim Scare in Europe: Hysteria or Threat

11 May The Muslim Scare in Europe: Hysteria or Threat 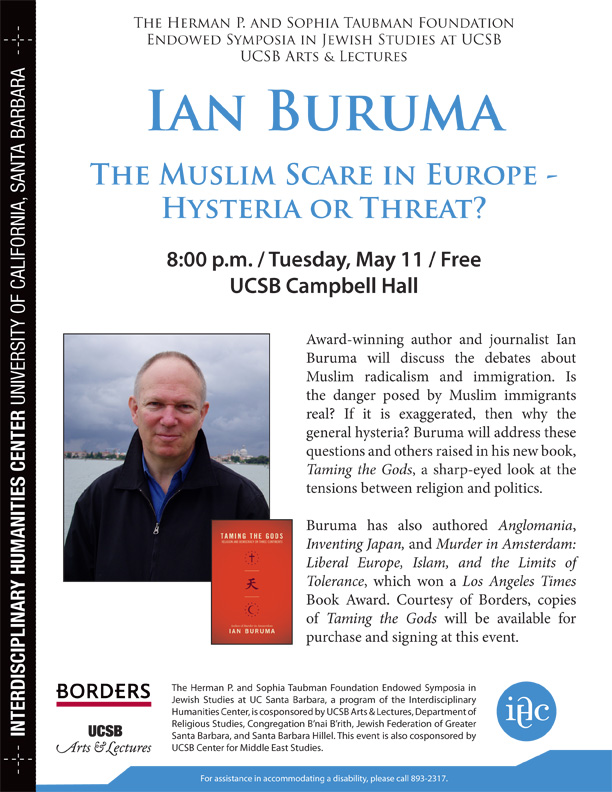 Award-winning author and journalist Ian Buruma will discuss the debates about Muslim radicalism, immigration, and the challenge from religion in several European countries where anti-immigrant populism is on the rise and Islam is the main focus. Is the danger posed by Muslim immigrants real?  If it is exaggerated, then why the general hysteria? Buruma will address these questions and others raised in his new book Taming the Gods: Religion and Democracy on Three Continents.  He is also the author of Anglomania, Inventing Japan, and Murder in Amsterdam: Liberal Europe, Islam, and the Limits of Tolerance, which won a Los Angeles Times Book Award.  Courtesy of Borders, copies of Taming the Gods will be available for purchase and signing at this event.

Sponsored by The Herman P. and Sophia Taubman Foundation Endowed Symposia in Jewish Studies at UC Santa Barbara, a program of the Interdisciplinary Humanities Center, and cosponsored by UCSB Arts & Lectures, the Dept. of Religious Studies, Congregation B’nai B’rith, the Jewish Federation of Greater Santa Barbara, Santa Barbara Hillel, and the Center for Middle East Studies.