The City and the Citizen: Forms in Bengali and Bombay Cinema of the 1950s

Home > Upcoming Events  > IHC Research Focus Groups  > The City and the Citizen: Forms in Bengali and Bombay Cinema of the 1950s

28 Apr The City and the Citizen: Forms in Bengali and Bombay Cinema of the 1950s

Posted at 13:01h in IHC Research Focus Groups by Admin 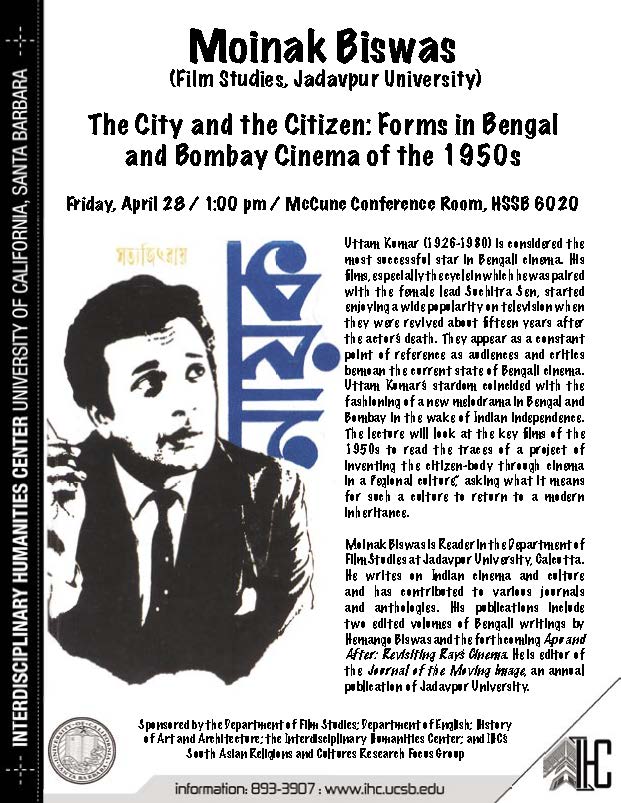 The lecture explored how the rise to stardom of Uttam Kumar (1926-1980)—who is considered the most successful actor in Bengali cinema—coincided with the fashioning of a new melodrama in Bengal and Bombay in the wake of Indian independence. The lecture examined the key films of the 1950s to read the traces of a project of inventing the citizen-body through cinema in a “regional culture,” asking what it means for such a culture to return to a modern inheritance.

Moinak Biswas is Reader in the Department of Film Studies at Jadavpur University, Calcutta. He writes on Indian cinema and culture and has contributed to various journals and anthologies. His publications include two edited volumes of Bengali writings by Hemango Biswas and the forthcoming Apu and After: Revisiting Ray’s Cinema. He is editor of the Journal of the Moving Image, an annual publication of Jadavpur University.