“Teaching the World to Sing in Harmony?”: Music, Advertising, and Multiculturalism

13 Jan “Teaching the World to Sing in Harmony?”: Music, Advertising, and Multiculturalism

Posted at 11:17h in Upcoming Events by Admin 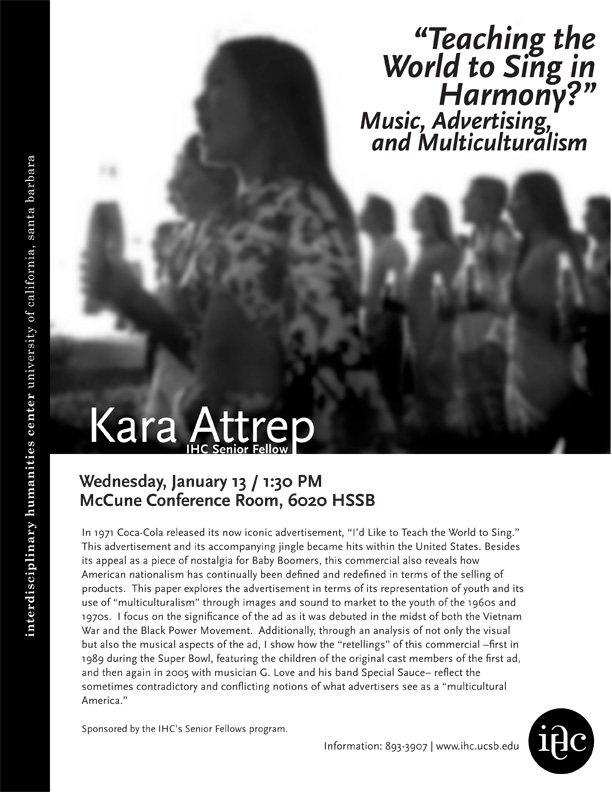 In 1971 Coca-Cola released its now iconic advertisement, “I’d Like to Teach the World to Sing.”  This advertisement and its accompanying jingle became hits within the United States.  Besides its appeal as a piece of nostalgia for Baby Boomers, this commercial also reveals how American nationalism has continually been defined and redefined in terms of the selling of products.  This paper explores the advertisement in terms of its representation of youth and its use of “multiculturalism” through images and sound to market to the youth of the 1960s and 1970s.  I focus on the significance of the ad as it was debuted in the midst of both the Vietnam War and the Black Power Movement.  Additionally, through an analysis of not only the visual but also the musical aspects of the ad, I show how the “retellings” of this commercial–first in 1989 during the Super Bowl, featuring the children of the original cast members of the first ad, and then again in 2005 with musician G. Love and his band Special Sauce– reflect the sometimes contradictory and conflicting notions of what advertisers see as a “multicultural America.”