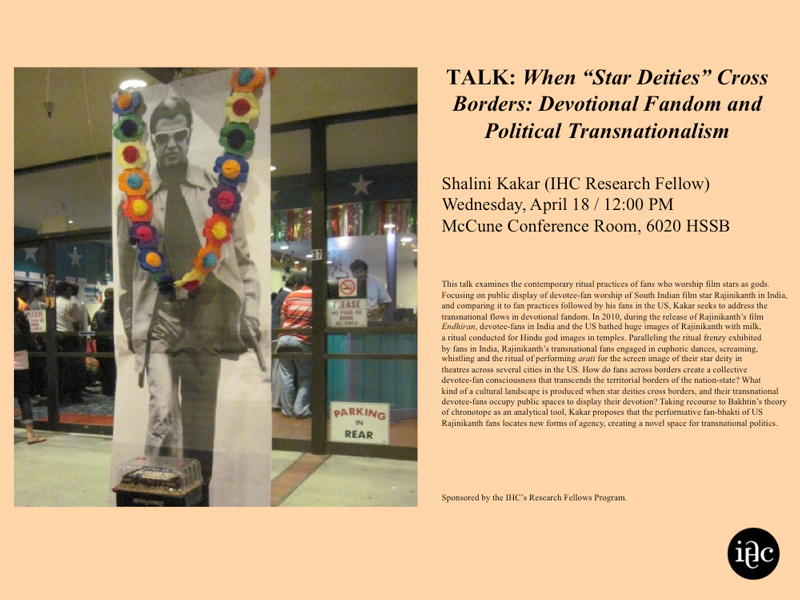 This talk examines the contemporary ritual practices of fans who worship film stars as gods. Focusing on public display of devotee-fan worship of South Indian film star Rajinikanth in India, and comparing it to fan practices followed by his fans in the US, Kakar seeks to address the transnational flows in devotional fandom. In 2010, during the release of Rajinikanth’s film Endhiran, devotee-fans in India and the US bathed huge images of Rajinikanth with milk, a ritual conducted for Hindu god images in temples. Paralleling the ritual frenzy exhibited by fans in India, Rajinikanth’s transnational fans engaged in euphoric dances, screaming, whistling and the ritual of performing arati for the screen image of their star deity in theatres across several cities in the US. How do fans across borders create a collective devotee-fan consciousness that transcends the territorial borders of the nation-state? What kind of a cultural landscape is produced when star deities cross borders, and their transnational devotee-fans occupy public spaces to display their devotion? Taking recourse to Bakhtin’s theory of chronotope as an analytical tool, Kakar proposes that the performative fan-bhakti of US Rajinikanth fans locates new forms of agency, creating a novel space for transnational politics.