Semblance, Appearance and Disappearance: Critical Strategies in the Work of Gerhard Richter and Other Contemporary Artists

Home > Upcoming Events  > Semblance, Appearance and Disappearance: Critical Strategies in the Work of Gerhard Richter and Other Contemporary Artists

26 Apr Semblance, Appearance and Disappearance: Critical Strategies in the Work of Gerhard Richter and Other Contemporary Artists

Posted at 15:22h in Upcoming Events by Admin 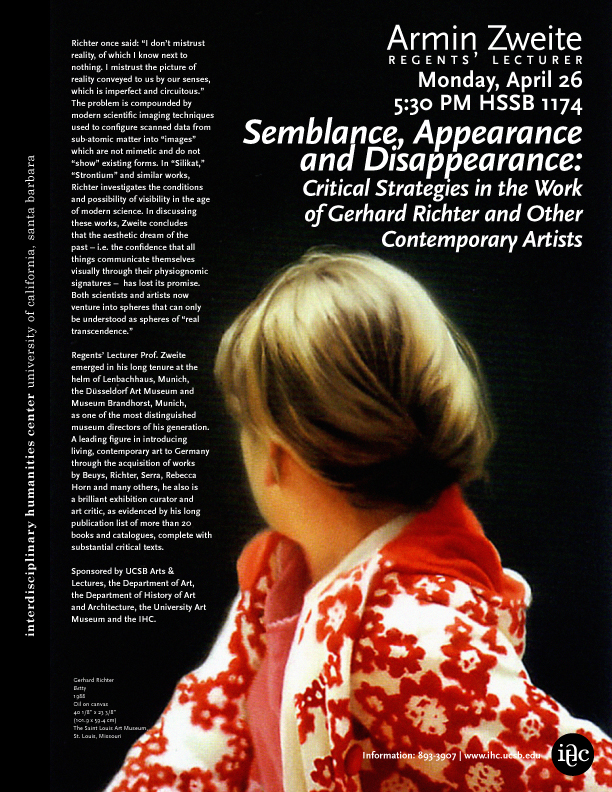 Richter once said: “I don’t mistrust reality, of which I know next to nothing. I mistrust the picture of reality conveyed to us by our senses, which is imperfect and circuitous.” The problem is compounded by modern scientific imaging techniques used to configure scanned data from sub-atomic matter into “images” which are not mimetic and do not “show” existing forms. In “Silikat,” “Strontium” and similar works, Richter investigates the conditions and possibility of visibility in the age of modern science. In discussing these works, Zweite concludes that the aesthetic dream of the past – i.e. the confidence that all things communicate themselves visually through their physiognomic signatures –  has lost its promise. Both scientists and artists now venture into spheres that can only be understood as spheres of “real transcendence.”

Regents’ Lecturer Prof. Zweite emerged in his long tenure at the helm of Lenbachhaus, Munich, the Düsseldorf Art Museum and Museum Brandhorst, Munich, as one of the most distinguished museum directors of his generation. A leading figure in introducing living, contemporary art to Germany through the acquisition of works by Beuys, Richter, Serra, Rebecca Horn and many others, he also is a brilliant exhibition curator and art critic, as evidenced by his long publication list of more than 20 books and catalogues, complete with substantial critical texts.

Sponsored by UCSB Arts & Lectures, the Departments of Art and History of Art and Architecture, the University Art Museum and the IHC.