Robot Caregivers and Robo-therapy in Japan: Treating the “Trauma” of Aging

26 Nov Robot Caregivers and Robo-therapy in Japan: Treating the “Trauma” of Aging 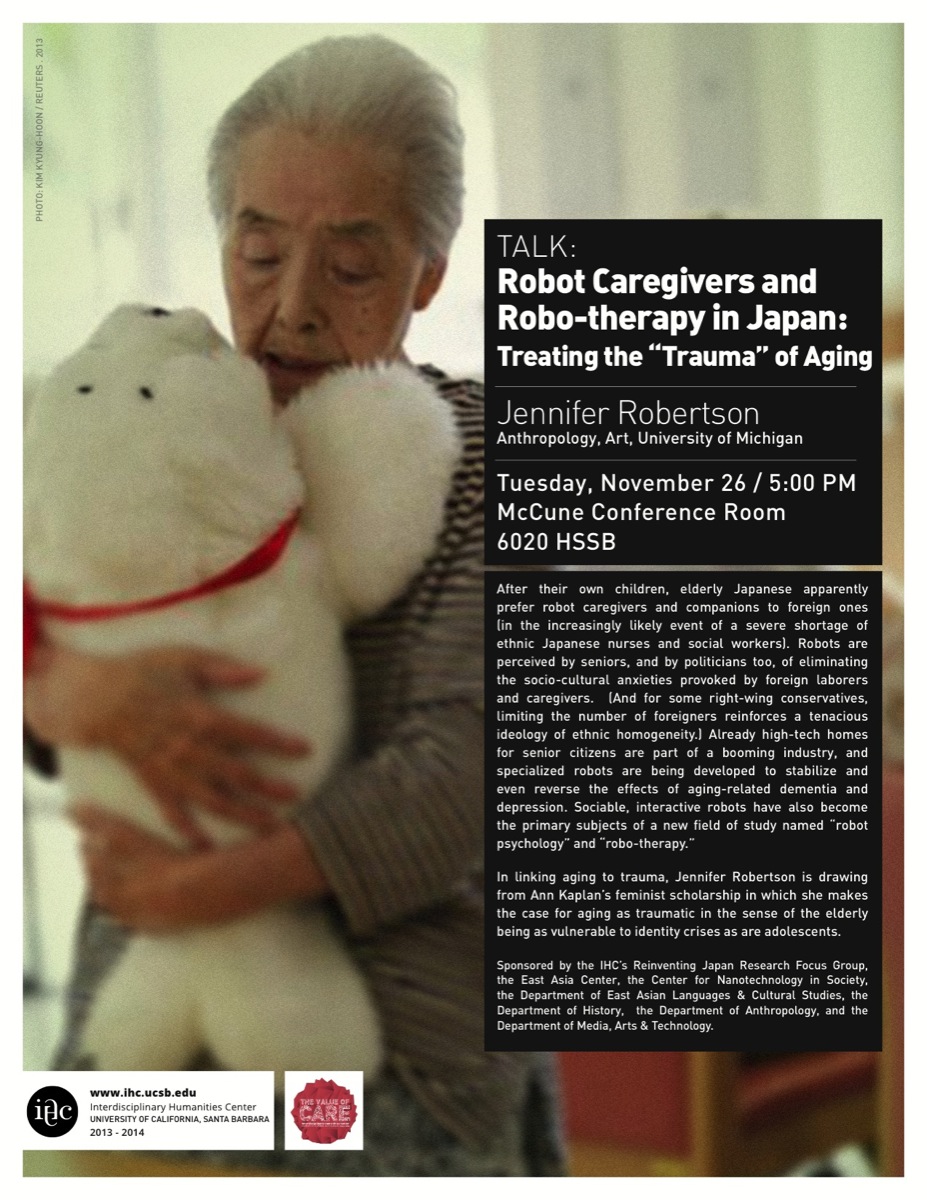 After their own children, elderly Japanese apparently prefer robot caregivers and companions to foreign ones (in the increasingly likely event of a severe shortage of ethnic Japanese nurses and social workers). Robots are perceived by seniors, and by politicians too, as eliminating the socio-cultural anxieties provoked by foreign laborers and caregivers.  (And for some right-wing conservatives, limiting the number of foreigners reinforces a tenacious ideology of ethnic homogeneity.) Already high-tech homes for senior citizens are part of a booming industry, and specialized robots are being developed to stabilize and even reverse the effects of aging-related dementia and depression.  Moreover, those promoting the country’s robotization argue that US$21 billion of elderly insurance payments could be saved over the next decade by using robots instead of humans to monitor the health of senior citizens, who now comprise 25% of the population. Sociable, interactive robots have also become the primary subjects of a new field of study named “robot psychology” and “robo-therapy.” Robertson’s talk represents a shift in focus from the more usual association of trauma with the consequences of the experience or witnessing of graphic violence. In linking aging to trauma, she is drawing from Ann Kaplan’s feminist scholarship in which she makes the case for aging as traumatic in the sense of the elderly being as vulnerable to identity crises as are adolescents.

Jennifer Robertson is Professor of Anthropology and the History of Art at the University of Michigan, Ann Arbor. She has non-budgeted appointments as Professor of Art & Design and Professor of Women’s Studies, and is a faculty associate in the Anthropology/History Program. Robertson is a former director and member of the Center for Japanese Studies, and an associate in the Science, Society and Technology Program, Center for Middle Eastern and North African Studies, and Center for South Asian Studies. Her six books and dozens of articles and chapters address a wide spectrum of subjects ranging from the 17th century to the present, including nativist and social rectification movements, agrarianism, sex and gender systems and ideologies, mass and popular culture, nostalgia and internationalization, urbanism, the place of Japan in American Anthropology, sexuality and suicide, theater and performance, votive and folk art, imperialism and colonialism, and eugenics and bioethics. Robertson is currently writing and editing articles and books on the cultural history of Japanese colonialism, eugenics, bio-art and contemporary art, ideologies of “blood” in Japan and Israel, and humanoid robots and posthumanism in Japan and elsewhere.

Click here to listen to a recording of Jennifer Robertson’s talk for the IHC’s Value of Care series.