“Representations in the Brain”: Neuroscientific Discourse and the Humanities

Home > Upcoming Events  > “Representations in the Brain”: Neuroscientific Discourse and the Humanities

21 Apr “Representations in the Brain”: Neuroscientific Discourse and the Humanities

Posted at 11:22h in Upcoming Events, IHC Series, The Humanities and the Brain by Admin 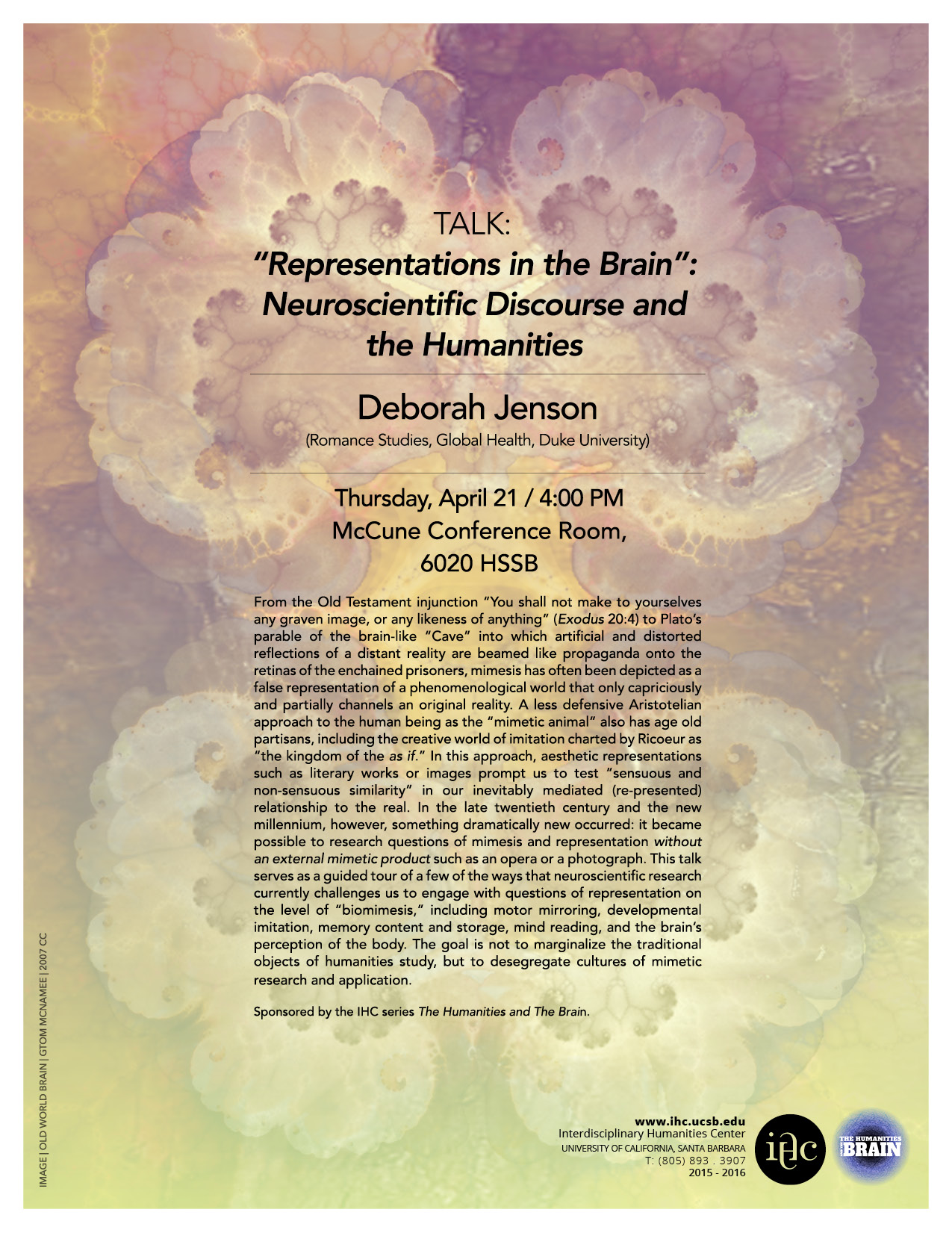 From the Old Testament injunction “You shall not make to yourselves any graven image, or any likeness of anything” (Exodus 20:4) to Plato’s parable of the brain-like “Cave” into which artificial and distorted reflections of a distant reality are beamed like propaganda onto the retinas of the enchained prisoners, mimesis has often been depicted as a false representation of a phenomenological world that only capriciously and partially channels an original reality. A less defensive Aristotelian approach to the human being as the “mimetic animal” also has age old partisans, including the creative world of imitation charted by Ricoeur as “the kingdom of the as if” (1984, 1:53). In this approach, aesthetic representations such as literary works or images prompt us to test “sensuous and non-sensuous similarity” in our inevitably mediated (re-presented) relationship to the real. In the late twentieth century and the new millennium, however, something dramatically new occurred: it became possible to research questions of mimesis and representation without an external mimetic product such as an opera or a photograph. This talk serves as a guided tour of a few of the ways that neuroscientific research currently challenges us to engage with questions of representation on the level of “biomimesis,” including motor mirroring, developmental imitation, memory content and storage, mind reading, and the brain’s perception of the body. The goal is not to marginalize the traditional objects of humanities study, but to desegregate cultures of mimetic research and application.

Deborah Jenson’s literary history of the Haitian Revolution, Beyond the Slave Narrative: Politics, Sex, and Manuscripts in the Haitian Revolution, was published with Liverpool UP in 2011. A co-edited volume with medical historians Warwick Anderson and Richard E. Keller, Unconscious Dominions: Psychoanalysis, Colonial Trauma, and Global Sovereignties is just out with Duke UP. With Michaeline Crichlow and Pat Northover, the special issue from our 2010 “States of Freedom: Freedom of States” conference in Kingston, Jamaica, will be published soon in The Global South. An article on mirror neurons and literary bio-mimesis with neuropsychiatrist Marco Iacoboni will be out soon in California Italian Studies. The Haiti Humanities Laboratory that she co-directs with Laurent Dubois continues to generate collaborative projects with social and/or instrumental relevance, such as our Haiti: History Embedded in Amber artwork and catalog, and a forthcoming article and digital map on the history of Caribbean cholera in the CDC journal Emerging Infectious Diseases.

Click here to listen to a recording of Deborah Jenson’s talk from the 2016-16 IHC series: The Humanities and the Brain.

Sponsored by the IHC series The Humanities and The Brain.