Rebel Without a Cuisine: Julia Child and the Making of the American Cook

Home > Endowments  > Rebel Without a Cuisine: Julia Child and the Making of the American Cook

13 May Rebel Without a Cuisine: Julia Child and the Making of the American Cook 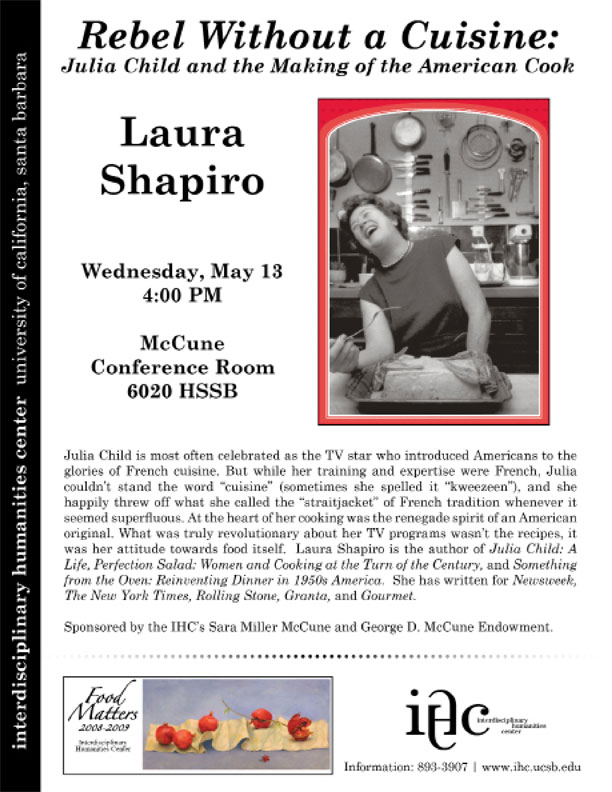 Julia Child is most often celebrated as the TV star who introduced Americans to the glories of French cuisine. But while her training and expertise were French, Julia couldn’t stand the word “cuisine” (sometimes she spelled it “kweezeen”), and she happily threw off what she called the “straitjacket” of French tradition whenever it seemed superfluous. At the heart of her cooking was the renegade spirit of an American original. What was truly revolutionary about her TV programs wasn’t the recipes, it was her attitude towards food itself.  Laura Shapiro is the author of Julia Child: A Life, Perfection Salad: Women and Cooking at the Turn of the Century, and Something from the Oven: Reinventing Dinner in 1950s America. She has written for Newsweek, The New York Times, Rolling Stone, Granta, and Gourmet.