Radio / Puppets, or Old New Media and the Afterlife of the Mexican Avant-Garde

Home > Upcoming Events  > Radio / Puppets, or Old New Media and the Afterlife of the Mexican Avant-Garde

30 Apr Radio / Puppets, or Old New Media and the Afterlife of the Mexican Avant-Garde 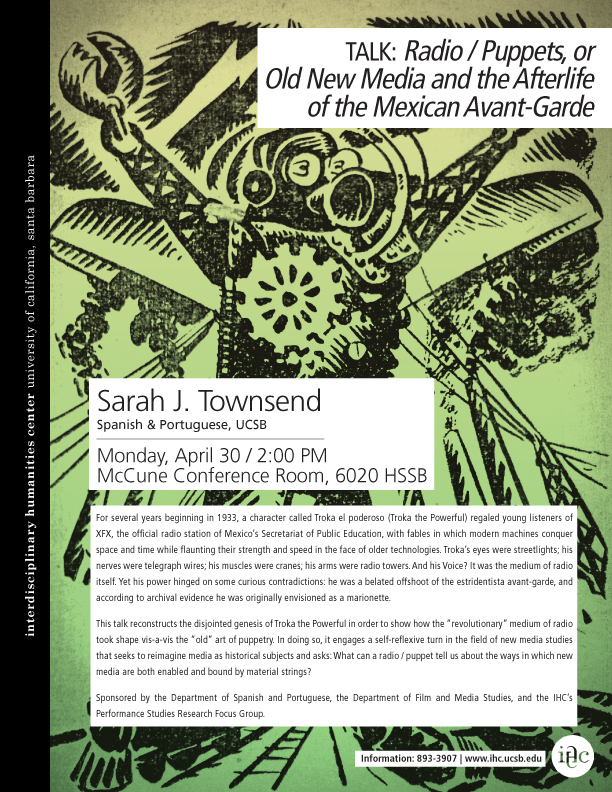 Over the course of several years beginning in 1933, a character called Troka el Poderoso (Troka the Powerful) regaled young listeners of XFX, the official radio station of Mexico’s Secretariat of Public Education, with fables in which modern machines conquer space and time by flaunting their strength and speed in the face of older technologies. Troka’s eyes were streetlights; his nerves were telegraph wires; his muscles were cranes; his arms were radio towers. His voice was the medium of radio itself. Troka was the ghost in the machine, the imaginary agent of technology that would lead Mexico out of underdevelopment and place the country on par with its imperial neighbor to the north. Yet for all his promises to put paid to the past, Troka was a belated offshoot of the estridentista avant-garde. While he claimed to be the medium of radio, archival evidence indicates that he was originally envisioned (and perhaps embodied) as a marionette.

This presentation reconstructs the disjointed genesis of Troka the Powerful in order to show how the “revolutionary” medium of radio took shape vis-a-vis the “old” art of puppetry. In doing so, it engages a self-reflexive turn in the field of new media studies that seeks to reconceptualize the newness of digital media by reimagining media as historical subjects. It offers a new angle on current debates about the impact of digital media on theater and other modes of “live” performance. This talk asks what a radio puppet born in the afterlife of the avant-garde in a “backward” country such as post-revolutionary Mexico can tell us about the power and precarity of technological agency—particularly in the context of our recent economic recession, when it is increasingly apparent that new media are both enabled and bound by material strings.