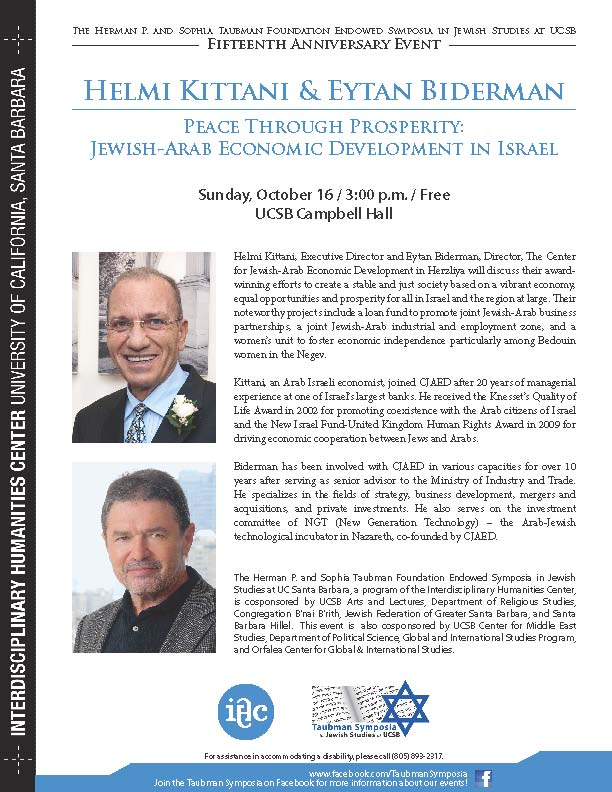 Helmi Kittani, an Arab Israeli economist, became Executive Director of the Center for Jewish-Arab Economic Development in 1992, after 20 years of managerial experience at one of Israel’s largest banks. In 2002, Kittani was awarded the Knesset’s Quality of Life Award, along with CJAED founder Sarah Kreimer, from Speaker of the Knesset MK Avraham Burg, for their longstanding efforts to improve the quality of life of Arab citizens of Israel and to promote tolerance and understanding between Jews and Arabs. In 2009, Kittani was awarded the New Israel Fund Human Rights Award in recognition of his achievements in promoting human rights, civil rights and equality for the Arab citizens of Israel. He holds a degree in banking from Tel-Aviv University, and is on the New Generation Technologies (NGT) Arab-Jewish Technological Incubator Board of Directors.

Eytan Biderman is director of the Center for Jewish-Arab Economic Development. Biderman specializes in the fields of strategy, business development, M&A and private investments. He serves on the board of NGT (New Generation Technology) – the technological incubator in Nazareth, is the chairman of the underwriting committee of Mizrahi-Tefahot Underwriting – the investment banking arm of the Mizrahi banking group, and on the boards of other companies, including high-tech firms. Previously, he served as senior advisor to the Ministry of Industry and to the Ministry of Economics, and well as a lecturer on business strategy in academic institutions. He holds an MBA from Harvard.

The Center for Jewish-Arab Economic Development is a non-profit organization, established in 1988 by a group of Jewish and Arab businesspeople. The guiding principle of the Center and its activities is that Jewish-Arab economic cooperation in Israel is essential for peace, prosperity and economic stability in Israel and the region at large. CJAED acts on the premise that Israel’s primary resource is its people; that Israel’s strength lies in its pluralism and democracy, and that the Arab community must be integrated into the Israeli mainstream economy and society.

Sponsored by The Herman P. and Sophia Taubman Foundation Endowed Symposia in Jewish Studies at UC Santa Barbara, a program of the Interdisciplinary Humanities Center, and cosponsored by UCSB Arts and Lectures, the Department of Religious Studies, Congregation B’nai B’rith, Jewish Federation of Greater Santa Barbara,Santa Barbara Hillel, the UCSB Center for Middle East Studies, the Department of Political Science, the Global and International Studies Program, and the Orfalea Center for Global & International Studies.