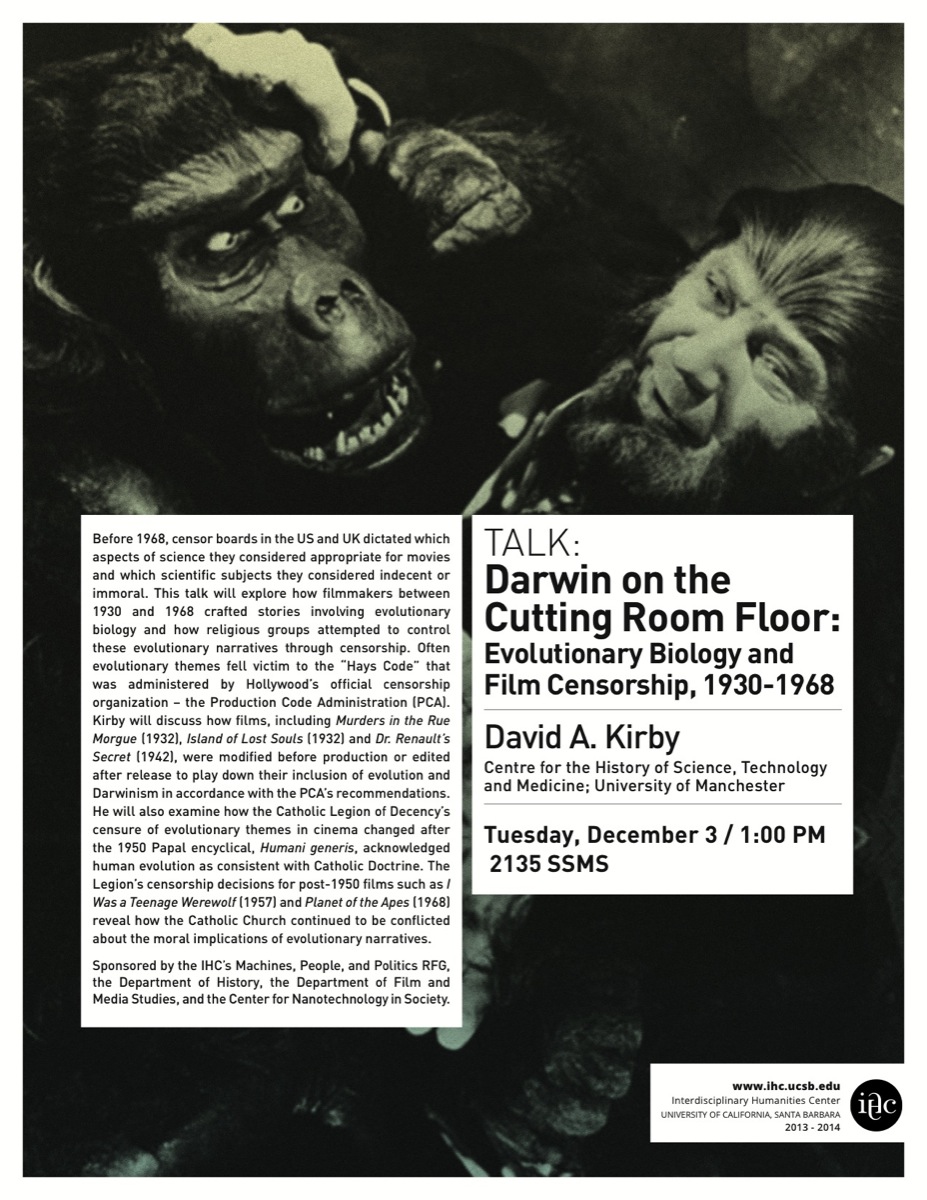 David A. Kirby (Centre for the History of Science, Technology and Medicine; University of Manchester)
Tuesday, December 3 / 1:00 PM
2135 SSMS

Before 1968, censor boards in the US and UK dictated which aspects of science they considered appropriate for movies and which scientific subjects they considered indecent or immoral. This talk will explore how filmmakers between 1930 and 1968 crafted stories involving evolutionary biology and how religious groups attempted to control these evolutionary narratives through censorship. Often evolutionary themes fell victim to the “Hays Code” that was administered by Hollywood’s official censorship organization –the Production Code Administration (PCA). Kirby will discuss how films, including Murders in the Rue Morgue (1932), Island of Lost Souls (1932) and Dr. Renault’s Secret (1942), were modified before production or edited after release to play down their inclusion of evolution and Darwinism in accordance with the PCA’s recommendations. He will also examine how the Catholic Legion of Decency’s censure of evolutionary themes in cinema changed after the 1950 Papal encyclical, Humani generis, acknowledged human evolution as consistent with Catholic Doctrine. The Legion’s censorship decisions for post-1950 films such as I Was a Teenage Werewolf (1957) and Planet of the Apes (1968) reveal how the Catholic Church continued to be conflicted about the moral implications of evolutionary narratives.

David A. Kirby was a practicing evolutionary geneticist before leaving bench science to become Senior Lecturer in Science Communication Studies at the University of Manchester. Several of his publications address the relationship between cinema, genetics and biotechnology. He has also studied how media professionals utilize, negotiate and transform science in order to tell stories about science in movies and on television. His book Lab Coats in Hollywood: Science, Scientists and Cinema examines collaborations between scientists and the entertainment industry in the production of movies and demonstrates how these fictional texts affect real world science and technology. He recently received a prestigious Investigator Award from the Wellcome Trust to investigate the interactions among the biosciences, religion and entertainment. He is currently writing a book titled Indecent Science: Science and Film Censorship, 1930-1968 which will explore how movies served as a battleground over science’s role in influencing morality.

Sponsored by the IHC’s Machines, People, and Politics RFG, the Dept. of History, the Dept. of Film and Media Studies, and the Center for Nanotechnology in Society.