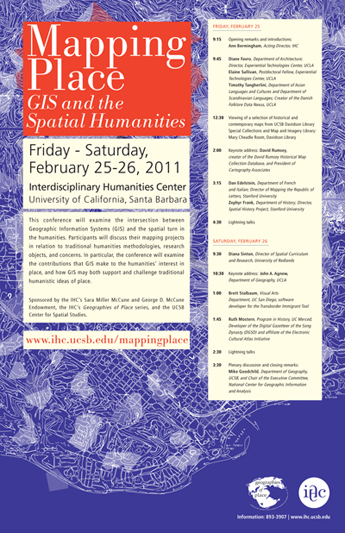 This conference will examine the intersection between Geographic Information Systems (GIS) and the spatial turn in the humanities. Participants have been asked to describe their mapping projects in relation to traditional humanities methodologies, research objects, and concerns. In particular, the conference will examine the contributions that GIS make to the humanities’ interest in place, and how GIS may both support and challenge traditional humanistic ideas of place.

The conference will be free and open to the public. To RSVP, please send an email to ldevendorf@ihc.ucsb.edu.

Sponsored by the IHC’s Sara Miller McCune and George D. McCune Endowment, the IHC’s Geographies of Place series, and the UCSB Center for Spatial Studies.

John Agnew is Distinguished Professor of Geography at UCLA and a specialist in political geography. In 2006 he was given the Distinguished Scholarship Award by the Association of American Geographers. Educated at the Universities of Exeter and Liverpool in England and Ohio State in the United States, Agnew is best known for reinventing “geopolitics” as a field of study, and for his theoretical and empirical efforts at showing how national politics is best understood in terms of the geographical dynamics of “places” and how they are made out of both local and long-distance determinants. His publications include Place and Politics (1987), The Power of Place (1989), Place and Politics in Modern Italy (2002), Berlusconi’s Italy: Mapping Contemporary Italian Politics (2008), and Globalization and Sovereignty (2009).

David Rumsey is President of Cartography Associates, a digital publishing company based in San Francisco, and director of Luna Imaging, a provider of software for online image collections.  Rumsey’s collection of historical maps numbers over 150,000 cartographic items and is one of the largest private map collections in the United States. He received his BA and MFA from Yale University where he was a lecturer in art and a founding member of Yale Research Associates in the Arts, a group of artists working with electronic technologies.  In 2002, Rumsey received an Honors Award from the Special Libraries Association for making his private map collection available to the public via the Internet at www.davidrumsey.com. In 2009 Rumsey committed to donating his physical and digital map collection to Stanford University.

Dan Edelstein works primarily on eighteenth-century France, which also serves as a convenient launching pad for raids into the nineteenth and twentieth centuries, as well as the early modern period. His publications include The Terror of Natural Right: Republicanism, the Cult of Nature, and the French Revolution (Chicago: University of Chicago Press, 2009) and The Enlightenment: A Genealogy (Chicago: University of Chicago Press, 2010).  With J.P. Daughton, Edelstein co-directs the French Culture Workshop at the Stanford Humanities Center, and with Paula Findlen, is a principal investigator for a project called “Mapping the Republic of Letters,” which received a three-year Presidential Fund for Innovation in the Humanities grant, and a “Digging into Data” grant from the NEH

Diane Favro is a professor of Architecture and Urban Design at UCLA.  Her research focuses on the urbanism of ancient Rome, archaeological historiography, women in architecture, and the pedagogy of architectural history.  Her publications include Streets: Critical Perspectives on Public Space (University of California Press, 1994), The Urban Image of Augustan Rome (Cambridge University Press, 1996), and numerous writings on ancient architecture, urban laws and administration, the experience of ancient cities, and methods of architectural history.  She is Director of the UCLA Experiential Technologies Center, which creates real-time digital models of historic environments (Digital Roman Forum, Digital Karnak), and promotes humanities research using new technologies.

Zephyr Frank is an Associate Professor of History at Stanford University, Director of the Spatial History Project, and the principal investigator for the Terrain of History project. This project is an international collaborative project that seeks to reconstruct and analyze the social, cultural, and economic spaces of nineteenth-century Rio de Janeiro. Professor Frank has been conducting this research for the last eight years.

Ruth Mostern (faculty.ucmerced.edu/rmostern/index.html) is Associate Professor and Founding Faculty in the School of Social Sciences, Humanities and Arts at the University of California, Merced.  An expert in Chinese and world history, she has a long-standing interest in socially-authored, spatial, and digital tools for reasoning and communicating about history.  She has recently published the Digital Gazetteer of the Song Dynasty (songgis.ucmercedlibrary.info),co-authored with Elijah Meeks.  Her book Dividing the Realm in Order to Govern:  The Spatial Organization of the Song State is forthcoming from Harvard University Press.

Diana Stuart Sinton is the Director of Spatial Curriculum and Research at the University of Redlands (California) where she leads LENS (LEarNing Spatially), a campus-wide initiative to integrate mapping and spatial perspectives into diverse academic disciplines. Her focus is the role for spatial literacy in higher education, a topic that she has written about in publications such as Understanding Place: GIS and Mapping across the Curriculum (ESRI Press, 2007). Before moving to California in 2007, Diana was a Chief Program Officer at NITLE (the National Institute for Technology and Liberal Education) where she developed mapping-based curriculum and taught workshops for faculty in the liberal arts and sciences at dozens of NITLE institutions.

Brett Stalbaum is a lecturer with security of employment in the Visual Arts Department at UCSD, and coordinator of the ICAM major. A serial collaborator, he was a founding member of the information theory/art corporation C5 in 1997, and the Electronic Disturbance Theater in 1998. With EDT he co-developed electronic civil disobedience software called FloodNet, which has been used on behalf of the Zapatista movement against the websites of the Presidents of Mexico and the United States, as well as the Pentagon. Current collaborative projects include walkingtools.net, which provides an umbrella for XML, APIs, Applications and Projects for and by walking artists, and with the CALIT2 B.A.N.G. Lab/EDT where he is the primary software developer for the Transborder Immigrant Tool project.

Elaine Sullivan is a post-doctoral fellow in UCLA’s Keck Program in Digital Cultural Mapping and adjunct assistant professor of Near  Eastern Languages and Cultures.  She served as project coordinator for the “Digital Karnak Project,” creating a multi-phase 3D model of the famous ancient Egyptian temple of Amun-Re at Karnak.  Dr. Sullivan teaches mapping technologies at UCLA and has incorporated neo-geography tools into a variety of Humanities courses on the  ancient world.

Timothy R. Tangherlini is a professor in the Scandinavian Section and the Dept. of Asian Languages and Cultures at UCLA. His primary area of research is folklore. In recent years, he has been developing computational approaches to pattern discovery in the large archival folklore resources of the Danish Folklore Archive. His current work focuses on mapping places mentioned in the approximately 250,000 stories that comprise the Evald Tang Kristensen collection, and connecting these stories to the storytellers who told them, as well as linking them to the field collecting journeys on which they were collected.