The Manhattan Mosque and Burning Qur’ans: Placing an American Dilemma in Perspective

03 Nov The Manhattan Mosque and Burning Qur’ans: Placing an American Dilemma in Perspective 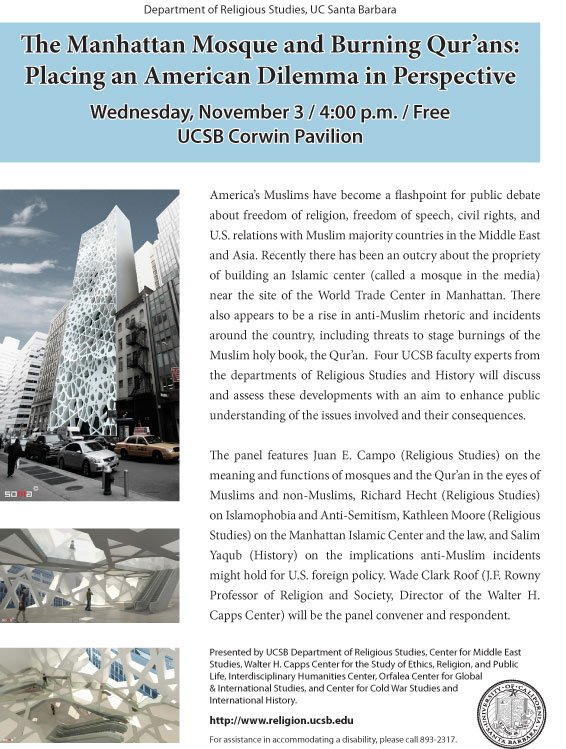 America’s Muslims have become a flashpoint for public debate about freedom of religion, freedom of speech, civil rights, and U.S. relations with Muslim majority countries in the Middle East and Asia. Recently there has been an outcry about the propriety of building an Islamic center (called a mosque in the media) near the site of the World Trade Center in Manhattan. There also appears to be a rise in anti-Muslim rhetoric and incidents around the country, including threats to stage burnings of the Muslim holy book, the Qur’an.  Four UCSB faculty experts from the departments of Religious Studies and History will discuss and assess these developments with an aim to enhance public understanding of the issues involved and their consequences. Panelists are Juan E. Campo (Religious Studies), Richard Hecht (Religious Studies), Kathleen Moore (Religious Studies), Salim Yaqub (History), and Wade Clark Roof (J.F. Rowney Professor of Religion and Society, Director of the Walter H. Capps Center).