High and Dry: On Deserts and ‘Crisis’

Home > Upcoming Events  > High and Dry: On Deserts and ‘Crisis’

04 Dec High and Dry: On Deserts and ‘Crisis’

Posted at 09:59h in Upcoming Events, IHC Series, Archive, Audio / Visual, The Anthropocene: Views from the Humanities by Admin 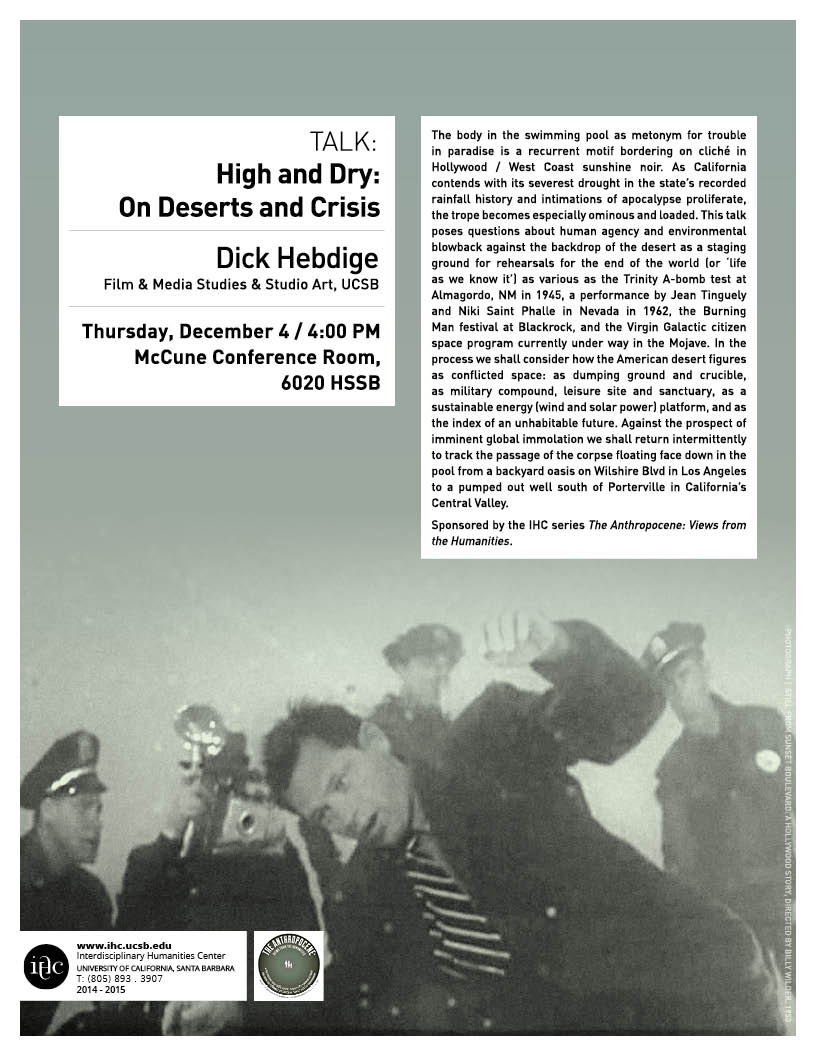 The body in the swimming pool as metonym for trouble in paradise is a recurrent motif bordering on cliché in Hollywood/ West Coast sunshine noir. As California contends with its severest drought in the state’s recorded rainfall history and intimations of apocalypse proliferate, the trope becomes especially ominous and loaded. This talk poses questions about human agency and environmental blowback against the backdrop of the desert as a staging ground for rehearsals for the end of the world (or ‘life as we know it’) as various as the Trinity A-bomb test at Almagordo, NM in 1945, a performance by Jean Tinguely and Niki Saint Phalle in Nevada in 1962, the Burning Man festival at Blackrock, and the Virgin Galactic citizen space program currently under way in the Mojave. In the process we shall consider how the American desert figures as conflicted space: as dumping ground and crucible, as military compound, leisure site and sanctuary, as a sustainable energy (wind and solar power) platform, and as the index of an unhabitable future. Against the prospect of imminent global immolation we shall return intermittently to track the passage of the corpse floating face down in the pool from a backyard oasis on Wilshire Blvd in Los Angeles to a pumped out well south of Porterville in California’s Central Valley.

A cultural critic and theorist, Hebdige has published widely on youth subculture, contemporary music, art and design, and consumer and media culture. His books include: Subculture: The Meaning of Style (Methuen, 1979); Cut ‘n’ Mix: Culture, Identity and Caribbean Music (Methuen, 1987); and Hiding in the Light: On Images and Things (Routledge, Methuen, 1988). His current interests include the integration of autobiography and mixed media in critical writing and pedagogy.

Dick Hebdige – “High and Dry: On Deserts and ‘Crisis'” from Environmental Humanities Center on Vimeo.