Hearts of Pine: Song in the Lives of Three Korean Survivors of the Japanese “Comfort Women”

Home > Upcoming Events  > Hearts of Pine: Song in the Lives of Three Korean Survivors of the Japanese “Comfort Women”

09 Oct Hearts of Pine: Song in the Lives of Three Korean Survivors of the Japanese “Comfort Women” 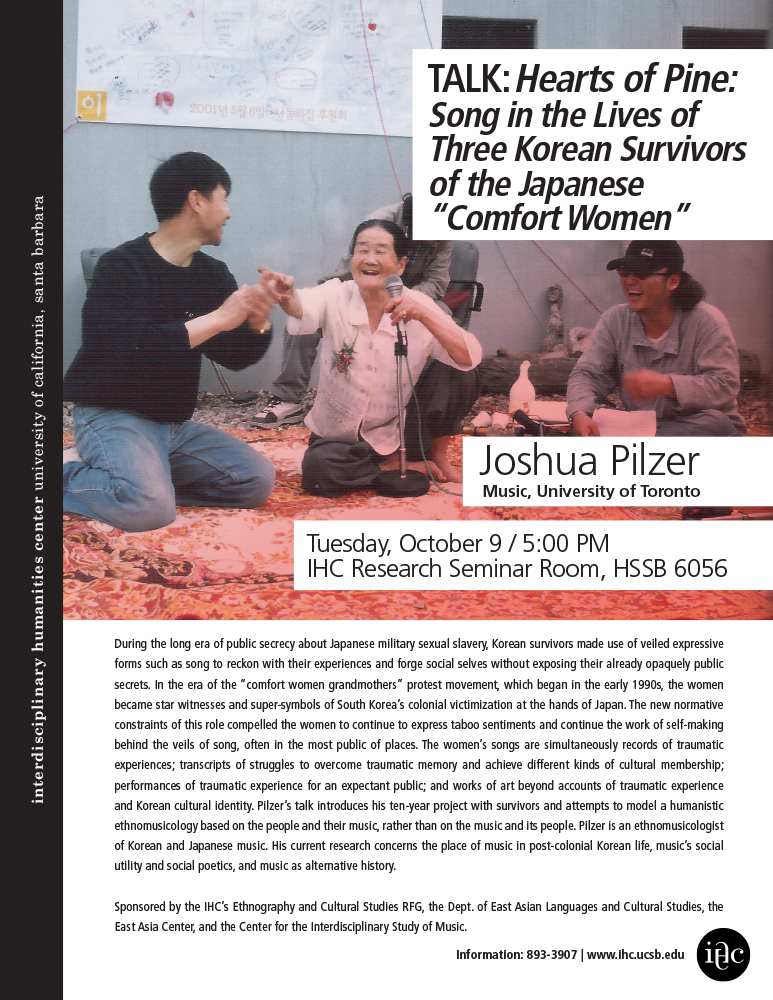 During the long era of public secrecy about Japanese military sexual slavery, Korean survivors made use of veiled expressive forms such as song to reckon with their experiences and forge social selves without exposing their already opaquely public secrets. In the era of the “comfort women grandmothers” protest movement, which began in the early 1990s, the women became star witnesses and super-symbols of South Korea’s colonial victimization at the hands of Japan. The new normative constraints of this role compelled the women to continue to express taboo sentiments and continue the work of self-making behind the veils of song, often in the most public of places. The women’s songs are simultaneously records of traumatic experiences; transcripts of struggles to overcome traumatic memory and achieve different kinds of cultural membership; performances of traumatic experience for an expectant public; and works of art beyond accounts of traumatic experience and Korean cultural identity.  Pilzer’s talk introduces his ten-year project with survivors and attempts to model a humanistic ethnomusicology based on the people and their music, rather than on the music and its people. Pilzer is an ethnomusicologist of Korean and Japanese music. His current research concerns the place of music in post-colonial Korean life, music’s social utility and social poetics, and music as alternative history.