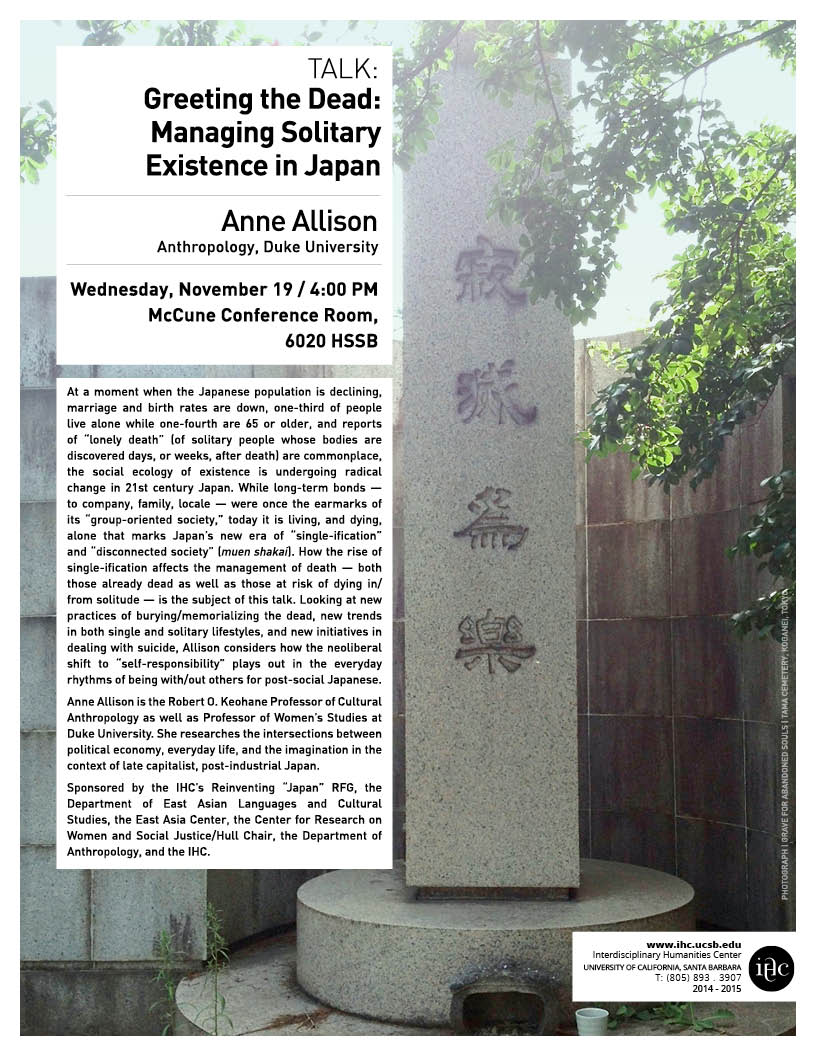 At a moment when the Japanese population is declining, marriage and birth rates are down, one-third of people live alone while one-fourth are 65 or older, and reports of “lonely death” (of solitary people whose bodies are discovered days, or weeks, after death) are commonplace, the social ecology of existence is undergoing radical change in 21st century Japan. While long-term bonds—to company, family, locale—were once the earmarks of its “group-oriented society,” today it is living, and dying, alone that marks Japan’s new era of “single-ification” and “disconnected society” (muen shakai). How the rise of single-ification affects the management of death—both those already dead as well as those at risk of dying in/from solitude—is the subject of this talk. Looking at new practices of burying/memorializing the dead, new trends in both single and solitary lifestyles, and new initiatives in dealing with suicide, Allison will consider how the neoliberal shift to “self-responsibility” plays out in the everyday rhythms of being with/out others for post-social Japanese.

Anne Allison is the Robert O. Keohane Professor of Cultural Anthropology as well as Professor of Women’s Studies at Duke University. She researches the intersections between political economy, everyday life, and the imagination in the context of late capitalist, post-industrial Japan. Among many other publications, she is the author of Nightwork: Sexuality, Pleasure, and Corporate Masculinity in a Tokyo Hostess Club (University of Chicago Press, 1994); Permitted and Prohibited Desires: Mothers, Comics, and Censorship in Japan (University of California Press 2000); Millennial Monsters: Japanese Toys and the Global Imagination (University of California Press, 2006); and, her most recent Precarious Japan (Duke University Press, 2013).