Elephants for Want of Towns? Cities and the State in Precolonial Dahomey

Home > Upcoming Events  > Elephants for Want of Towns? Cities and the State in Precolonial Dahomey

25 May Elephants for Want of Towns? Cities and the State in Precolonial Dahomey

Posted at 10:08h in Upcoming Events by Admin 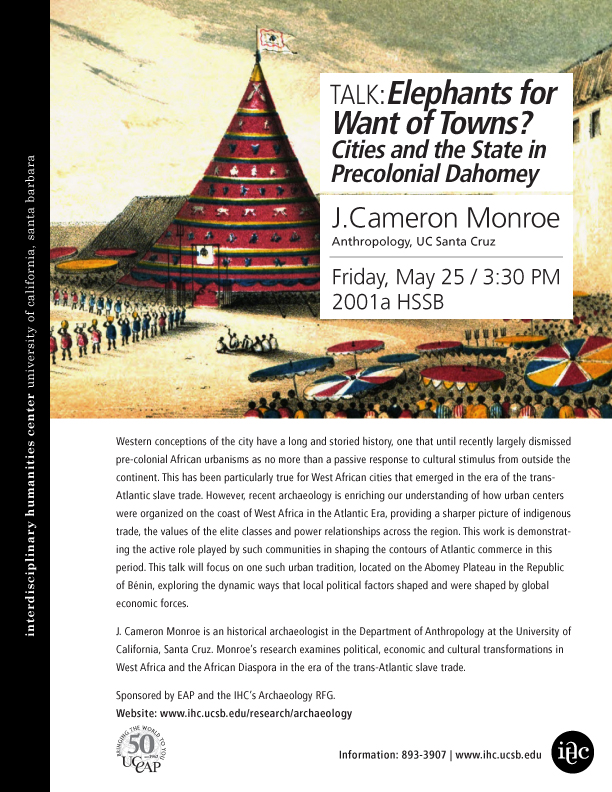 Western conceptions of the city have a long and storied history, one that until recently largely dismissed pre-colonial African urbanisms as no more than a passive response to cultural stimulus from outside the continent. This has been particularly true for West African cities that emerged in the era of the trans-Atlantic slave trade. However, recent archaeology is enriching our understanding of how urban centers were organized on the coast of West Africa in the Atlantic Era, providing a sharper picture of indigenous trade, the values of the elite classes and power relationships across the region. This work is demonstrating the active role played by such communities in shaping the contours of Atlantic commerce in this period. This talk will focus on one such urban tradition, located on the Abomey Plateau in the Republic of Bénin, exploring the dynamic ways that local political factors shaped and were shaped by global economic forces.

J. Cameron Monroe is an historical archaeologist in the Department of Anthropology at the University of California, Santa Cruz. Monroe’s research examines political, economic and cultural transformations in West Africa and the African Diaspora in the era of the trans-Atlantic slave trade. He has studied African-American ethnic identity and household-level craft production in early colonial Virginia, and currently he directs the Abomey Plateau Archaeological Project in the Republic of Bénin, West Africa. Integrating documentary, oral and archaeological data, the project focuses on the political economy of landscape and the built environment, and the nature of urban transformation in contact-period West Africa.

Sponsored by EAP and the IHC’s Archaeology RFG.