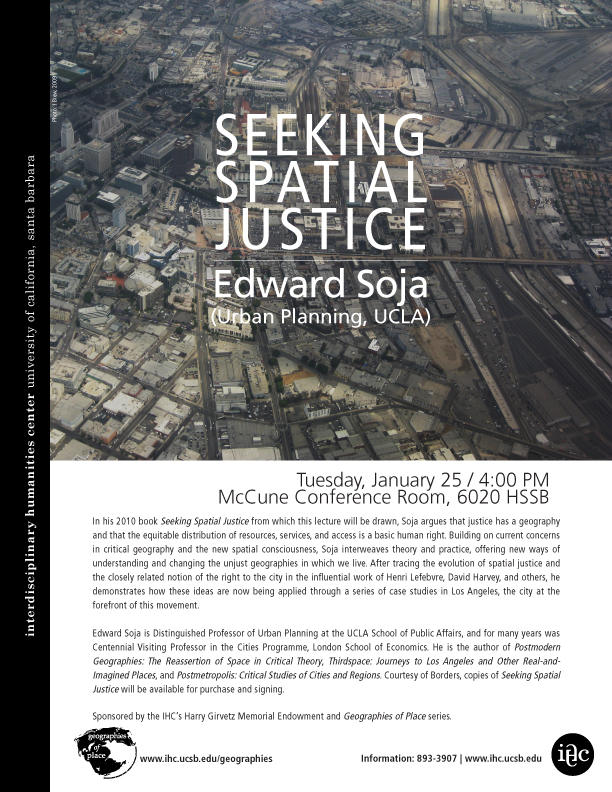 Unfortunately, this event has been cancelled.  We apologize for any inconvenience.

In his 2010 book Seeking Spatial Justice from which this lecture will be drawn, Soja argues that justice has a geography and that the equitable distribution of resources, services, and access is a basic human right. Building on current concerns in critical geography and the new spatial consciousness, Soja interweaves theory and practice, offering new ways of understanding and changing the unjust geographies in which we live. After tracing the evolution of spatial justice and the closely related notion of the right to the city in the influential work of Henri Lefebvre, David Harvey, and others, he demonstrates how these ideas are now being applied through a series of case studies in Los Angeles, the city at the forefront of this movement.  Edward Soja is Distinguished Professor of Urban Planning at the UCLA School of Public Affairs, and for many years was Centennial Visiting Professor in the Cities Programme, London School of Economics. He is the author of Postmodern Geographies: The Reassertion of Space in Critical Theory, Thirdspace: Journeys to Los Angeles and Other Real-and-Imagined Places, and Postmetropolis: Critical Studies of Cities and Regions. Courtesy of Borders copies of Seeking Spatial Justice will be available for purchase and signing.

Sponsored by the IHC’s Harry Girvetz Memorial Endowment and Geographies of Place series.