Digitize, Democratize: Libraries and the Future of Books

03 May Digitize, Democratize: Libraries and the Future of Books 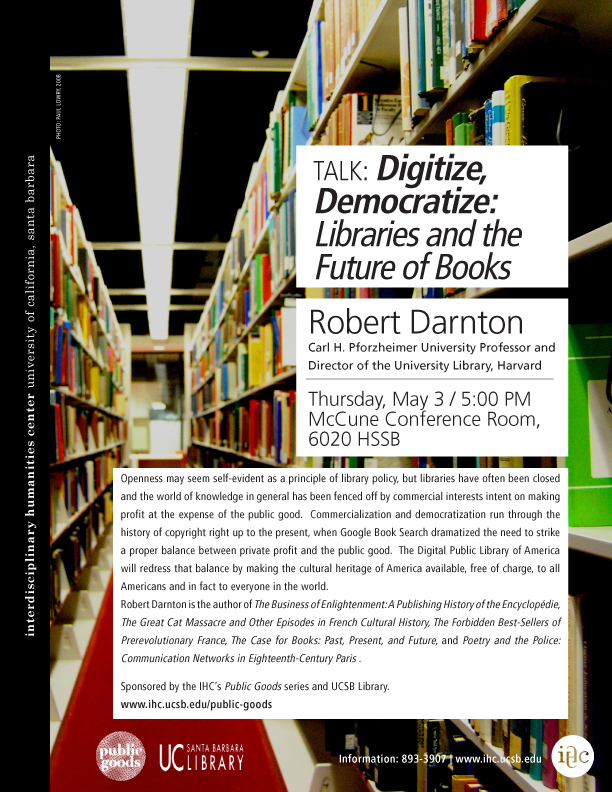 Openness may seem self-evident as a principle of library policy, but libraries have often been closed and the world of knowledge in general has been fenced off by commercial interests intent on making profit at the expense of the public good.  Commercialization and democratization run through the history of copyright right up to the present, when Google Book Search dramatized the need to strike a proper balance between private profit and the public good.  The Digital Public Library of America will redress that balance by making the cultural heritage of America available, free of charge, to all Americans and in fact to everyone in the world.

Robert Darnton is Carl H. Pforzheimer University Professor and University Librarian at Harvard.  He is the author of The Business of Enlightenment: A Publishing History of the Encyclopédie (1979), The Great Cat Massacre and Other Episodes in French Cultural History (1984), Berlin Journal, 1989-1990 (1991), The Forbidden Best-Sellers of Prerevolutionary France (1995), The Case for Books: Past, Present, and Future (2009), and Poetry and the Police: Communication Networks in Eighteenth-Century Paris (2010).

Sponsored by the IHC’s Public Goods series and UCSB Library.

Click here to listen to a recording of Robert Darnton’s talk from the IHC’s series: Public Goods.

Sponsored by the IHC’s Public Goods series and UCSB Library.