Depilation and Deforestation: Controlling Nature in the Amazon

09 Apr Depilation and Deforestation: Controlling Nature in the Amazon

Posted at 05:36h in Upcoming Events, IHC Series, The Anthropocene: Views from the Humanities by Admin 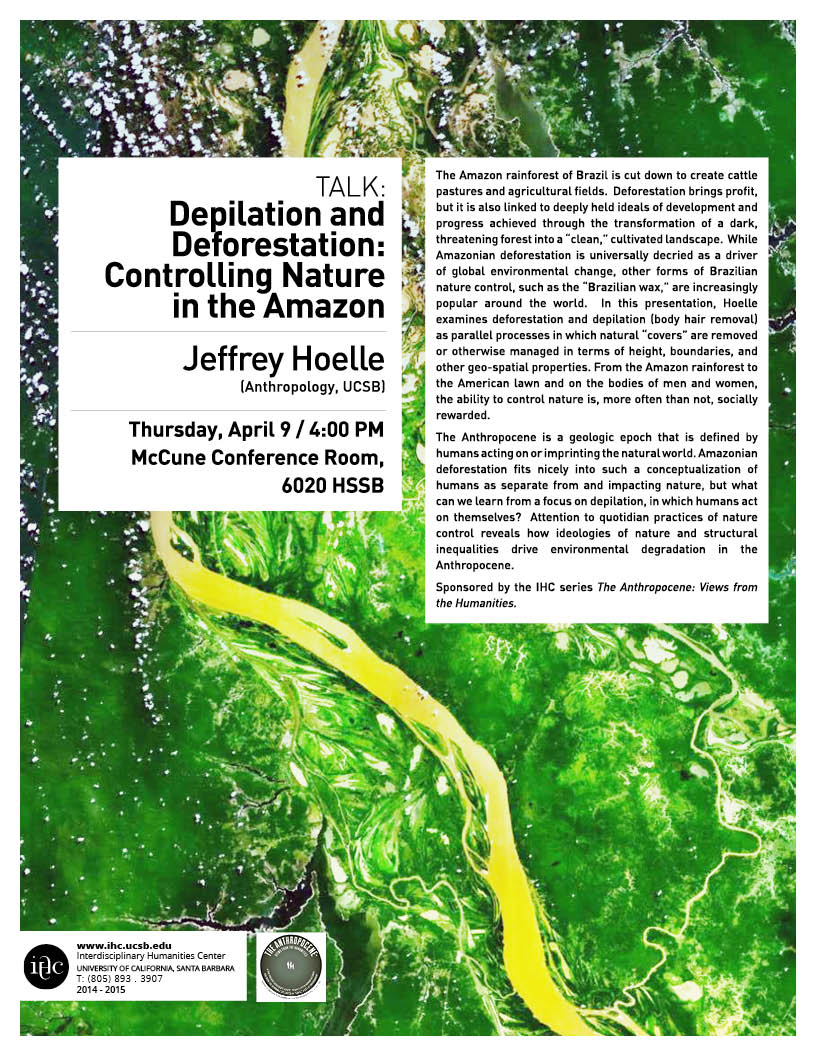 The Amazon rainforest of Brazil is cut down to create cattle pastures and agricultural fields.  Deforestation brings profit, but it is also linked to deeply held ideals of development and progress achieved through the transformation of a dark, threatening forest into a “clean,” cultivated landscape.  While Amazonian deforestation is universally decried as a driver of global environmental change, other forms of Brazilian nature control, such as the “Brazilian wax,” are increasingly popular around the world.  In this presentation, I examine deforestation and depilation (body hair removal) as parallel processes in which natural “covers” are removed or otherwise managed in terms of height, boundaries, and other geo-spatial properties. From the Amazon rainforest to the American lawn and on the bodies of men and women, the ability to control nature is, more often than not, socially rewarded.

The Anthropocene is a geologic epoch that is defined by humans acting on or imprinting the natural world. Amazonian deforestation fits nicely into such a conceptualization of humans as separate from and impacting nature, but what can we learn from a focus on depilation, in which humans act on themselves? Attention to quotidian practices of nature control reveals how ideologies of nature and structural inequalities drive environmental degradation in the Anthropocene.

Jeffrey Hoelle is a cultural anthropologist at UCSB. His research focuses on human-environment interactions, economic development and environmental conservation in the Brazilian Amazon. He studies Amazonian livelihoods and land uses in relation to ideals of work, nature, and masculinity, as well as food and landscape preferences. His aim is to better understand why destructive environmental practices, particularly cattle raising, make sense from the perspective of different actors in the Amazon region. He is the author Rainforest Cowboys: The Rise of Ranching and Cattle Culture in Western Amazonia. Hoelle’s current research focuses on cattle raising and cowboy/cattle cultures in the Amazon, India, and the American West; everyday forms of nature control; and the material and symbolic dimensions of beef and meat consumption.