Forum on Śāktism, Cosmopolitanisms, and the Construction of Hindu Identities

Home > Upcoming Events  > Forum on Śāktism, Cosmopolitanisms, and the Construction of Hindu Identities

07 Jun Forum on Śāktism, Cosmopolitanisms, and the Construction of Hindu Identities 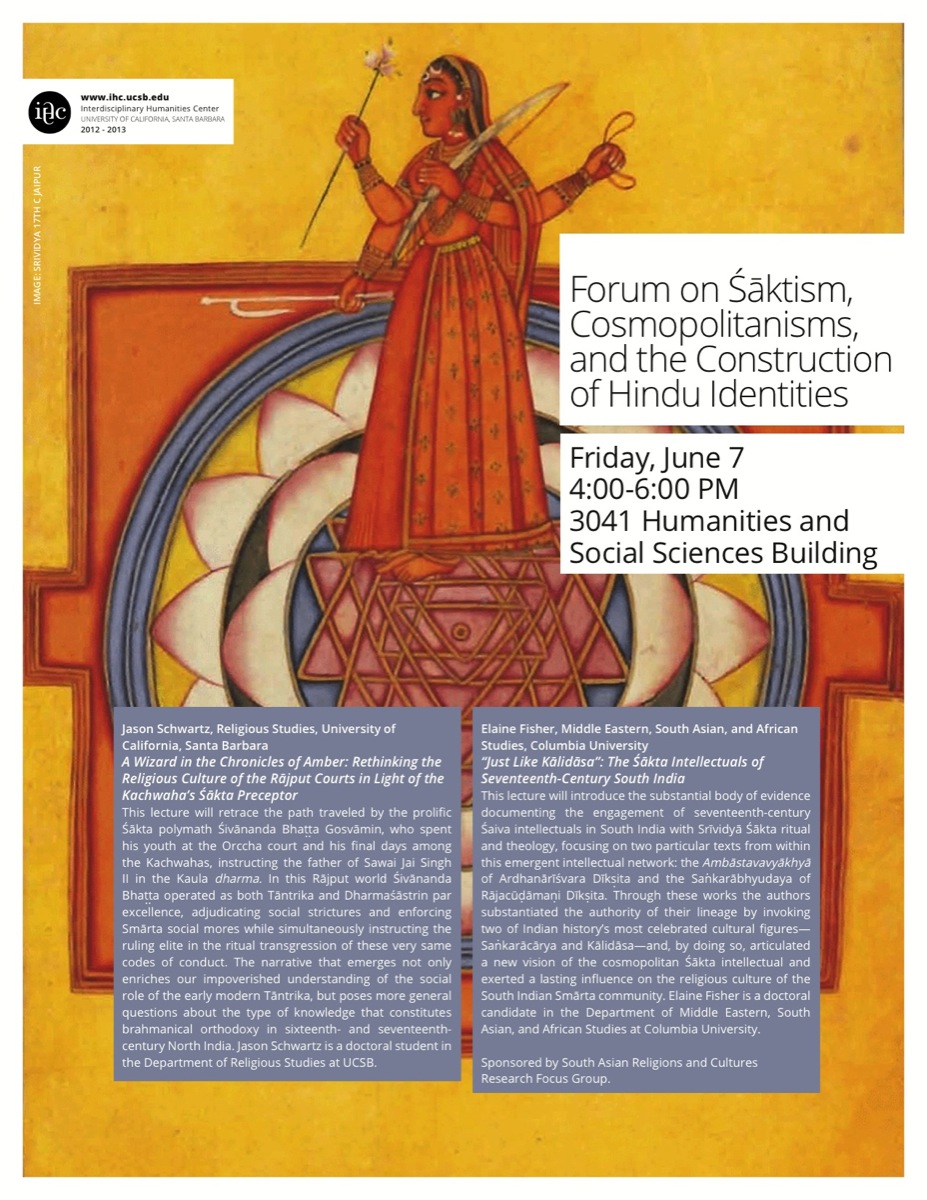 Jason Schwartz (Religious Studies)
A Wizard in the Chronicles of Amber: Rethinking the Religious Culture of the Rājput Courts in Light of the Kachwaha’s Śākta Preceptor
This lecture will retrace the path traveled by the prolific Śākta polymath Śivānanda Bhaṭṭa Gosvāmin, who spent his youth at the Orccha court and his final days among the Kachwahas, instructing the father of Sawai Jai Singh II in the Kaula dharma. In this Rājput world Śivānanda Bhaṭṭa operated as both Tāntrika and Dharmaśāstrin par excellence, adjudicating social strictures and enforcing Smārta social mores while simultaneously instructing the ruling elite in the ritual transgression of these very same codes of conduct. The narrative that emerges not only enriches our impoverished understanding of the social role of the early modern Tāntrika, but poses more general questions about the type of knowledge that constitutes brahmanical orthodoxy in sixteenth- and seventeenth-century North India. Jason Schwartz is a doctoral student in the Department of Religious Studies at UCSB.

Elaine Fisher (Middle Eastern, South Asian, and African Studies, Columbia University)
“Just Like Kālidāsa”: The Śākta Intellectuals of Seventeenth-Century South India
This lecture will introduce the substantial body of evidence documenting the engagement of seventeenth-century Śaiva intellectuals in South India with Srīvidyā Śākta ritual and theology, focusing on two particular texts from within this emergent intellectual network: the Ambāstavavyākhyā of Ardhanārīśvara Dīkṣita and the Saṅkarābhyudaya of Rājacūḍāmaṇi Dīkṣita. Through these works the authors substantiated the authority of their lineage by invoking two of Indian history’s most celebrated cultural figures—Saṅkarācārya and Kālidāsa—and, by doing so, articulated a new vision of the cosmopolitan Śākta intellectual and exerted a lasting influence on the religious culture of the South Indian Smārta community. Elaine Fisher is a doctoral candidate in the Department of Middle Eastern, South Asian, and African Studies at Columbia University.