Conservation, De-extinction, and the Future of Life

Home > Upcoming Events  > Conservation, De-extinction, and the Future of Life

02 Apr Conservation, De-extinction, and the Future of Life

Posted at 05:46h in Upcoming Events, IHC Series, The Anthropocene: Views from the Humanities by Admin 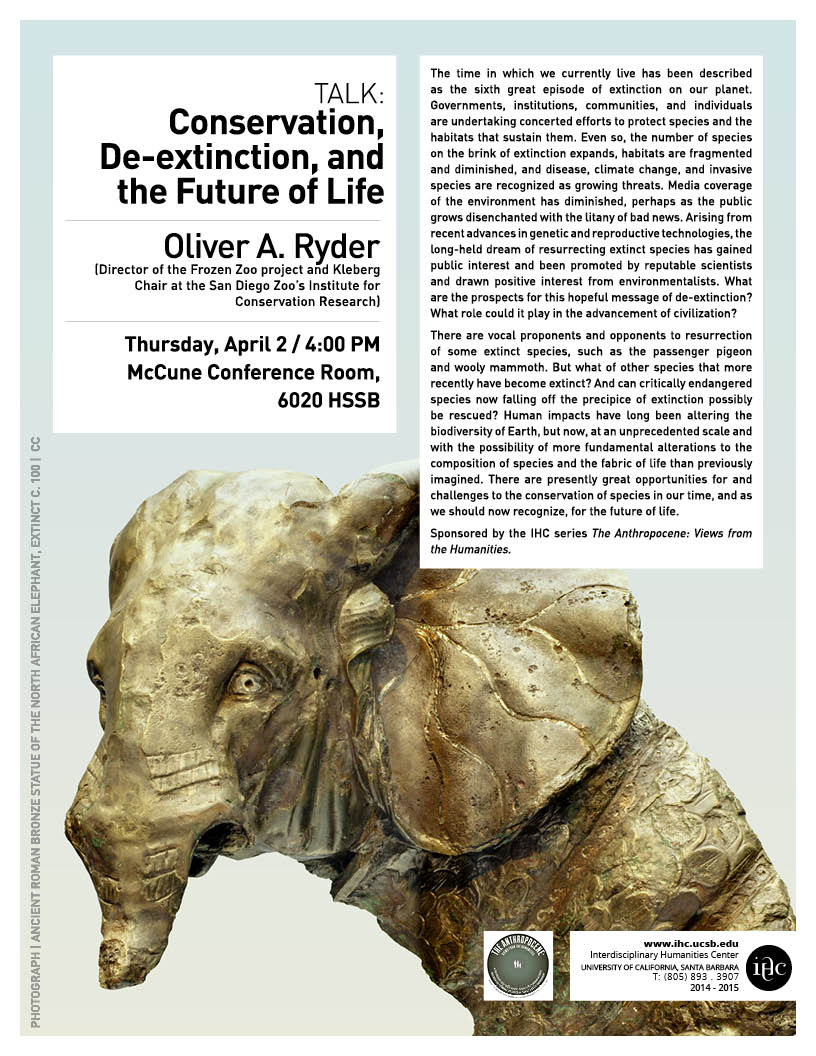 The time in which we currently live has been described as the sixth great episode of extinction on our planet. Governments, institutions, communities, and individuals are undertaking concerted efforts to protect species and the habitats that sustain them. Even so, the number of species on the brink of extinction expands, habitats are fragmented and diminished, and disease, climate change, and invasive species are recognized as growing threats. Media coverage of the environment has diminished, perhaps as the public grows disenchanted with the litany of bad news. Arising from recent advances in genetic and reproductive technologies, the long-held dream of resurrecting extinct species has gained public interest and been promoted by reputable scientists and drawn positive interest from environmentalists. What are the prospects for this hopeful message of de-extinction? What role could it play in the advancement of civilization?

There are vocal proponents and opponents to resurrection of some extinct species, such as the passenger pigeon and wooly mammoth. But what of other species that more recently have become extinct? And can critically endangered species now falling off the precipice of extinction possibly be rescued? Human impacts have long been altering the biodiversity of Earth, but now, at an unprecedented scale and with the possibility of more fundamental alterations to the composition of species and the fabric of life than previously imagined. There are presently great opportunities for and challenges to the conservation of species in our time, and as we should now recognize, for the future of life.

Dr. Oliver A. Ryder is Director of Genetics and holds the Kleberg Chair at the San Diego Zoo Institute for Conservation Research. He oversees a highly productive laboratory group that includes activities in the areas of molecular genetics, cytogenetics, cell culture, and tissue culture cryobanking. He directs the Frozen Zoo® project, a unique resource of cell cultures that has made notable scientific contributions in the field of conservation and other biological disciplines. His professional career has been devoted to developing and applying genetic research methods in support of endangered species conservation efforts for species held in the Zoo and wild populations.  He has authored more than 310 scientific papers, including citation classics in the field of mammalian evolution, conservation science and policy, comparative cytogenetics, and genomics research.  Dr. Ryder has contributed key studies relevant to conservation management efforts for gorillas, California condors, African rhinos, Przewalski’s horses, Anegada iguanas, and numerous other species.