Inaugural Lecture: Care of the Wild: Sense, Sentience and the ‘Primitive State’

17 Oct Inaugural Lecture: Care of the Wild: Sense, Sentience and the ‘Primitive State’

Posted at 01:03h in IHC Series, Archive, Audio / Visual, The Value of Care by Admin 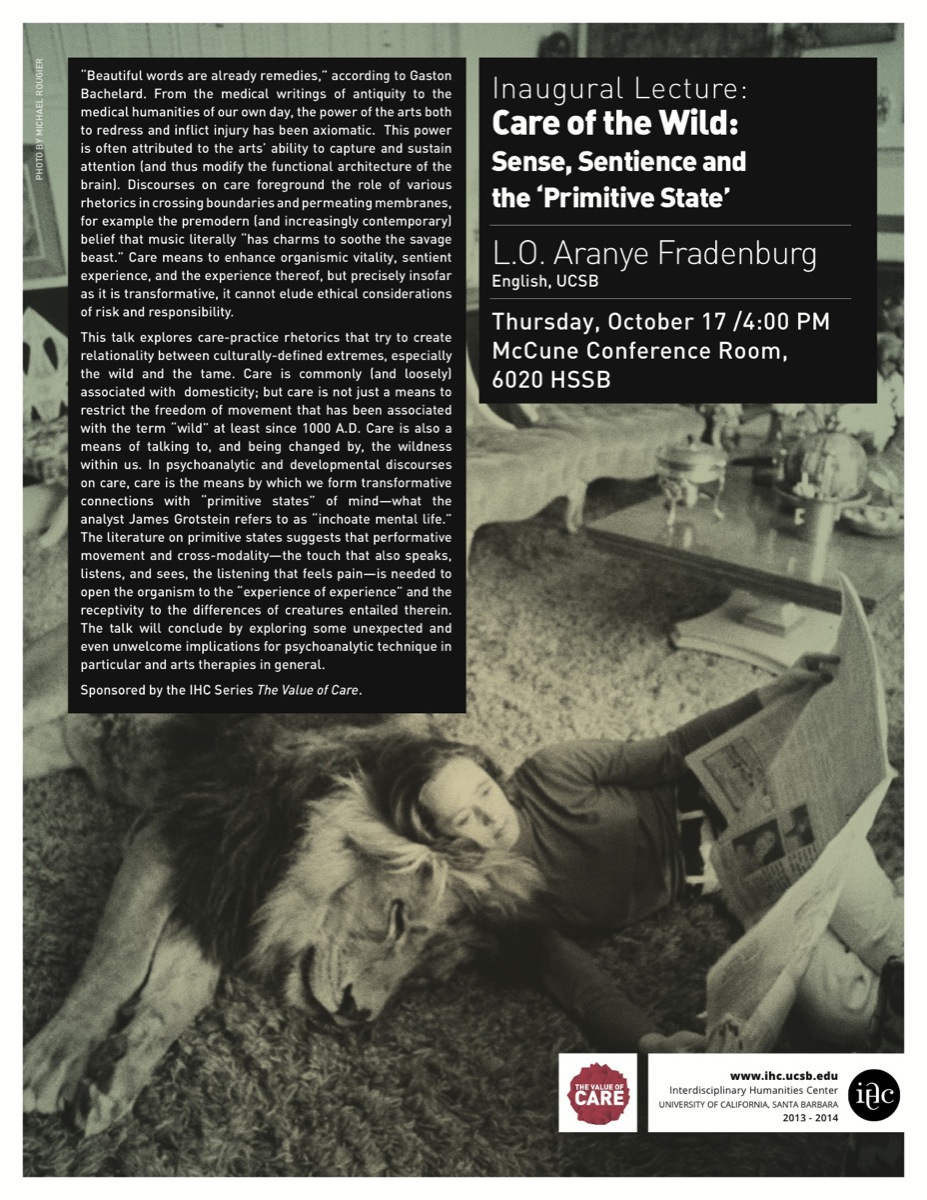 “Beautiful words are already remedies,” according to Gaston Bachelard.  From the medical writings of antiquity to the medical humanities of our own day, the power of the arts both to redress and inflict injury has been axiomatic.  This power is often attributed to the arts’ ability to capture and sustain attention (and thus modify the functional architecture of the brain).  Discourses on care foreground the role of various rhetorics in crossing boundaries and permeating membranes, for example the premodern (and increasingly contemporary) belief that music literally “has charms to soothe the savage beast.”  Care means to enhance organismic vitality, sentient experience, and the experience thereof, but precisely insofar as it is transformative, it cannot elude ethical considerations of risk and responsibility.

This talk explores care-practice rhetorics that try to create relationality between culturally-defined extremes, especially the wild and the tame.  Care is commonly (and loosely) associated with   domesticity; but care is not just a means to restrict the freedom of movement that has been associated with the term “wild” at least since 1000 A.D.  Care is also a means of talking to, and being changed by, the wildness within us.  In psychoanalytic and developmental discourses on care, care is the means by which we form transformative connections with “primitive states” of mind—what the analyst James Grotstein refers to as “inchoate mental life.”  The literature on primitive states suggests that performative movement and cross-modality—the touch that also speaks, listens, and sees, the listening that feels pain—is needed to open the organism to the “experience of experience” and the receptivity to the differences of creatures entailed therein.  The talk will conclude by exploring some unexpected and even unwelcome implications for psychoanalytic technique in particular and arts therapies in general.

Sponsored by the IHC Series The Value of Care.

Click here to listen to a recording of Aranye Fradenburg’s talk for the IHC’s Value of Care series.