Into the Bowels of the Anthropocene: Excrement and the Current Ecological Crisis

Home > Upcoming Events  > Into the Bowels of the Anthropocene: Excrement and the Current Ecological Crisis

20 Nov Into the Bowels of the Anthropocene: Excrement and the Current Ecological Crisis

Posted at 12:32h in Upcoming Events, IHC Series, Archive, Audio / Visual, The Anthropocene: Views from the Humanities by Admin 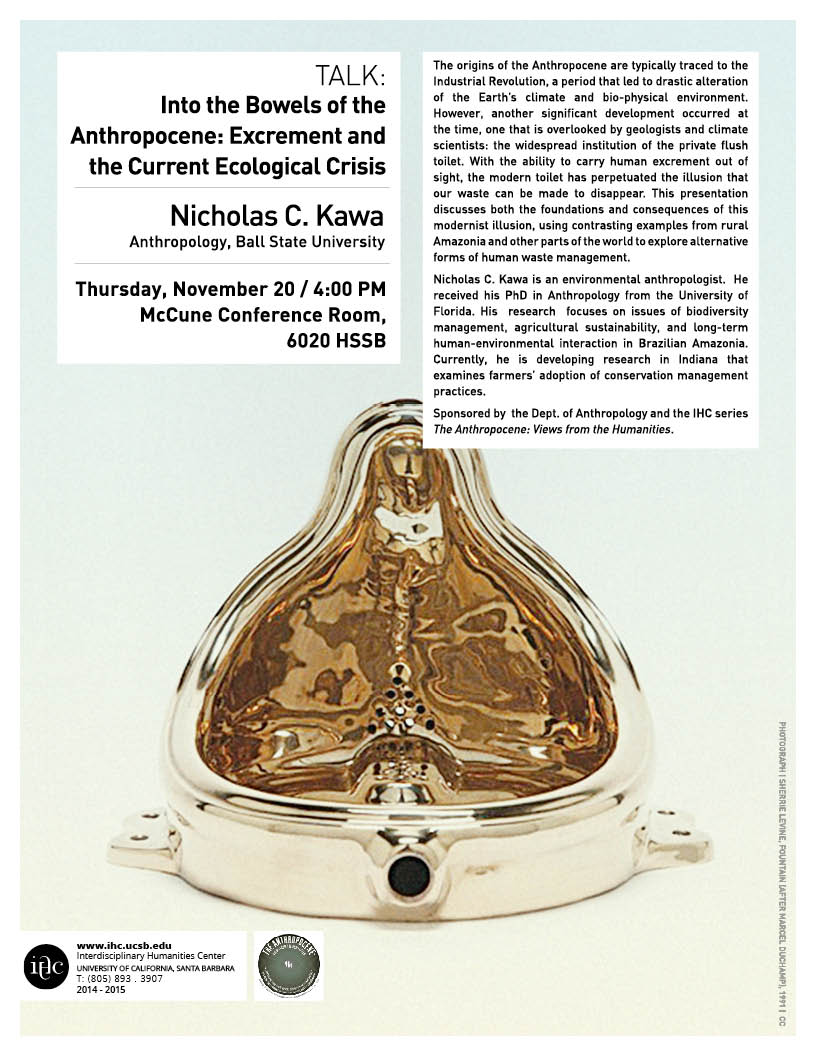 The origins of the Anthropocene are typically traced to the Industrial Revolution, a period that led to drastic alteration of the Earth’s climate and bio-physical environment. However, another significant development occurred at the time, one that is overlooked by geologists and climate scientists: the widespread institution of the private flush toilet. With the ability to carry human excrement out of sight, the modern toilet has perpetuated the illusion that our waste can be made to disappear. This presentation discusses both the foundations and consequences of this modernist illusion, using contrasting examples from rural Amazonia and other parts of the world to explore alternative forms of human waste management.

Nicholas C. Kawa is an environmental anthropologist.  He received his PhD in Anthropology from the University of Florida in August 2011. His  research  focuses on issues of biodiversity management, agricultural sustainability, and long-term human-environmental interaction in Brazilian Amazonia. Currently, he is developing research in Indiana that examines farmers’ adoption of conservation management practices.

Sponsored by the IHC series The Anthropecene: View from the Humanities.

Nicholas Kawa- ” Into the Bowels of the Anthropocene: Excrement and the Current Ecological Crisis” from Environmental Humanities Center on Vimeo.