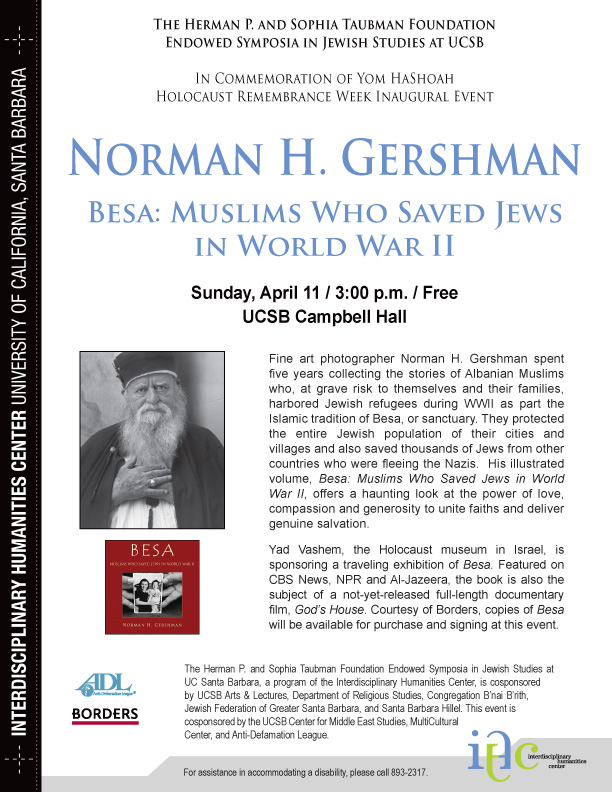 Fine art photographer Norman Gershman spent five years collecting the stories of Albanian Muslims who, at grave risk to themselves and their families, harbored Jewish refugees during WWII as part the Islamic tradition of Besa, or sanctuary. They protected the entire Jewish population of their cities and villages and also saved thousands of Jews from other European countries who were fleeing the Nazis.  Gershman’s work is found in the permanent collection of museums around the world. Since 2007, his photographs have been exhibited at Yad Vashem in Israel, at the United Nations’ Headquarters in New York, and at the European Union Headquarters in Strasbourg, France.  The stories in his book, Besa, are also the subject of a full-length documentary, God’s House. Copies of Besa will be available for purchase and signing at this at this free, public event commemorating Yom HaShoah and inaugurating Holocaust Remembrance Week at UCSB.

Sponsored by The Herman P. and Sophia Taubman Foundation Endowed Symposia in Jewish Studies at UC Santa Barbara, a program of the IHC, and cosponsored by UCSB Arts & Lectures, the Dept. of Religious Studies, Congregation B’nai B’rith, the Jewish Federation of Greater Santa Barbara, Santa Barbara Hillel, the Center for Middle East Studies, the MultiCultural Center, and the Anti-Defamation League.