What Do All Students Need To Know?

Home > Series  > What Do All Students Need To Know?

28 Oct What Do All Students Need To Know? 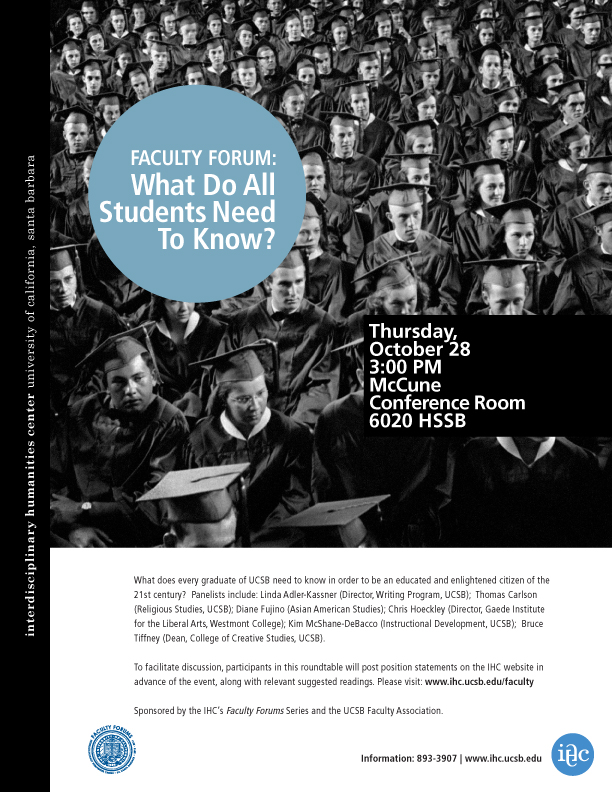 Sponsored by the IHC’s Faculty Forums series and the UCSB Faculty Association.

Linda Adler-Kassner
Director, Writing Program, UCSB
It’s easy to say that every UCSB graduate should know how to be a good writer to be an educated and enlightened 21st century citizen. After all, writing is seen as an engine of the economy, a “skill” crucial to citizens’ participation in an increasingly globalized culture. But while this ability to be a “good writer” and produce “good writing” might seem straightforward, just underneath that surface writing is a highly political activity. What is understood as “good writing” in a chemistry lab paper is not the same as “good writing” in a blog entry, and that is different from “good writing” in a historical analysis. What is understood as good writing, therefore, reflects the values of the communities where the writing is situated. To be truly educated enlightened citizens, then, UCSB students must first know how to analyze the conventions (rules) associated with “good writing” in a variety of communities, the intersections among conventions and the values important to those communities; and how those intersections affect definitions of “good writing.” Then, enlightened and educated citizens must be aware of larger ideas about the purposes of “good writing” (and, in fact, education more broadly) that shape their work as writers. Three such ideas run through the 20th and into the 21st century: writing as a means of participating in democratic culture; writing as a means of fitting into and participating in a growing economy; and writing as a means of contributing to individual economic advancement. In addition to understanding relationships among conventions of “good writing” and the values of the communities where “good writing” is defined, good writers must understand these different purposes and their implications in order to make decisions about the kinds of writers that they are and may become.
Click here to download Linda Adler-Kassner’s Framing (And) American Education
Click here to download Harry C. Boyte’s Civic Driven Change and Developmental Democracy

Thomas Carlson
Religious Studies, UCSB
The student graduating from college should know that her education, like enlightenment, is not a state she ever reaches, or a possession she finally secures, but the ongoing work–and obligation–of cultivating critical self-awareness in relation to the worlds that she inherits, inhabits and creates. Her education demands the relentless effort, and courage, to think on her own rather than to accept the imposition of authority (Immanuel Kant), and it requires of her the intellectual integrity to seek clarity about, and to take responsibility for, distinctions between fact and value (Max Weber). Because such autonomy and integrity of mind are tied intimately to clarity and rigor of expression, both linguistic and mathematical, the student should have a working command of the grammar and usage of “standard written English” as well as an understanding of their differences from other English dialects (David Foster Wallace); she should have real competence in the grammar, usage, and literatures of at least one foreign language; and she should be able to understand and evaluate relations between mathematical reasoning and empirical research in those social and natural sciences most relevant to public life (political science, economics, medicine, environmental and agricultural sciences, etc.). The graduating student should also have an historically, theoretically, and practically informed appreciation for the decisive roles–epistemological, ethical, and aesthetic–that media play in human thought and agency. The student’s exercise of citizenship should be grounded in critical awareness of the historical and conceptual foundations of modern liberal democracy, capitalism, and techno-science, and it should be attuned likewise to those globalizing forces–techno-scientific, economic, political–that are today transforming the character and categories of thought and agency by shifting such boundaries as those between human and non-human, individual and collective, subject and object, ontology and epistemology, science and ethics (Michel Serres). The most important thing, however, for a college graduate to derive from her schooling is not finally any knowledge, or skill of the mind, but a disposition of the heart: she should love education.
Links to texts referenced:
Immanuel Kant, “An Answer to the Question: What is Enlightenment?”
Max Weber, “Science as a Vocation” (mainly from p. 6 through the end)
David Foster Wallace, “Tense Present”
Michel Serres, “Revisiting The Natural Contract”

Diane Fujino
Asian American Studies, UCSB
What do students need to know to become enlightened, informed, and engaged participants in a globalized and diverse society? We all need to recognize that education is not simply the accumulation of facts, but rather knowledge is produced, and produced in a highly political environment. As K-12 schooling increasingly is about teaching to standardized tests, it becomes harder for students to develop a sense of agency over their own education, to ask challenging questions about the context of education, and to imagine the unimaginable possibilities for their own lives. A UCSB education ought to include an important body of facts and knowledges, but also an understanding of how different disciplines produce knowledge, ways for students to learn about other cultures and other perspectives, and ways for students to engage in their local communities. The ability to think critically from multiple perspectives and to develop, as Robin Kelley puts it, poetic knowledge to transport us to another place will be necessary if we are to move beyond our current situation.

Chris Hoeckley
Director, Gaede Institute for the Liberal Arts,  Westmont College
“What do All Students Need to Know?”
What should every graduate of UCSB know in order to be an educated and enlightened citizen in the 21st century? Speaking as an outsider, here’s one stab at an answer: Nothing–at least nothing that wasn’t already taught in high school. High school is the place to teach core knowledge. Obviously this doesn’t always happen, and colleges and universities probably have remedial work to do. But to accept the premise that it is part of the role of colleges and universities to offer students the core knowledge necessary to be educated and enlightened citizens is to accept that many citizens–those who only complete high school–are somehow insufficient as citizens. As tempting as that view can be, it does seem undemocratic. If there is a shared body of knowledge necessary to good citizenship, we have to insist that the high schools teach it.
Having said this, I should also say that I’m a great believer in a strong general education program. But its purpose is to raise foundational intellectual skills–communication, analysis, synthesis, problem solving, interpretation, research, etc.–to a high level, and to help future specialists see the interdependencies of different areas of learning–that literature and mathematics can speak to one another, for instance. Its purpose is not to teach a body of knowledge essential to citizenship.
Click here to view Chris Hoeckley suggested reading material

Kim McShane-DeBacco
Instructional Development, UCSB
“A Pedagogy for Uncertainty”
Today’s university students face a future characterized by ontological, ethical and epistemological uncertainties.  Barnett (2004) proposes a set of dispositions that in his view students need  in order to cope with an uncertain future.  Such dispositions include carefulness, thoughtfulness, humility, criticality, receptiveness,  resilience, courage, and stillness. (Barnett, 2004, pp 258-259).  In  my paper and IHC panel presentation, I would like to consider whether  and under what pedagogical conditions instructors might develop these dispositions and characteristics that could in fact promote the  “adaptability”, “flexibility” and “self-reliance” that the corporate sector so often declares it looks for in graduate employees.  I will  focus my comments specifically on the opportunities afforded by blended (hybrid) instruction.

Bruce H. Tiffney
Earth Science and Dean, College of Creative Studies, UCSB
UC Santa Barbara’s approach to general education mirrors the historically siloed nature of departments, and more significantly, is based on a funding structure that encourages general education courses within rather than between departments. The result is a requirement of up to18 courses in areas A-G, with nothing that guarantees that the student will see what features link cultures and the ideas that they spawned across disciplines and generations. What UCSB needs to create is a structure to simultaneously promote depth in the major while ensuring that students develop an intellectual habit of synthesis, an ability to recognize patterns across disciplines, placing their disciplinary knowledge in a historical and social context. By example, one of the classic tensions within a university lies between the humanities and the sciences. Each teaches its own core, yet I would argue that the humanities document the human context within which science takes place. Further, science itself has evolved over the 170 years the term has had its current meaning, and even more so if we trace its earlier roots. In many cases that evolution has both mirrored and influenced its surrounding society. I believe that the university will more effectively fulfill its responsibility when we bring science to the humanities, and create a truly interdisciplinary education in the humanities for scientists. This will result either from interdepartmental, team-taught courses, or from campus consensus that most general education courses will seek to integrate an interdisciplinary and historical approach to their syllabus. Then our much-vaunted reputation for interdisciplinary research and graduate education will truly be mirrored in the training we give our undergraduates.

As an example of the kind of “interconnectedness” that I would like students to become aware of, I refer you to Richard Holmes “The Age of Wonder” (Vintage Books, 2010, although this is but one example of a tradition of synthetic scholarship, e.g., Daniel J. Boorstin’s “Cleopatra’s Nose: Essays on the unexpected “ (Vintage Books, 1995).