Posted at 16:37h in Upcoming Events by Admin 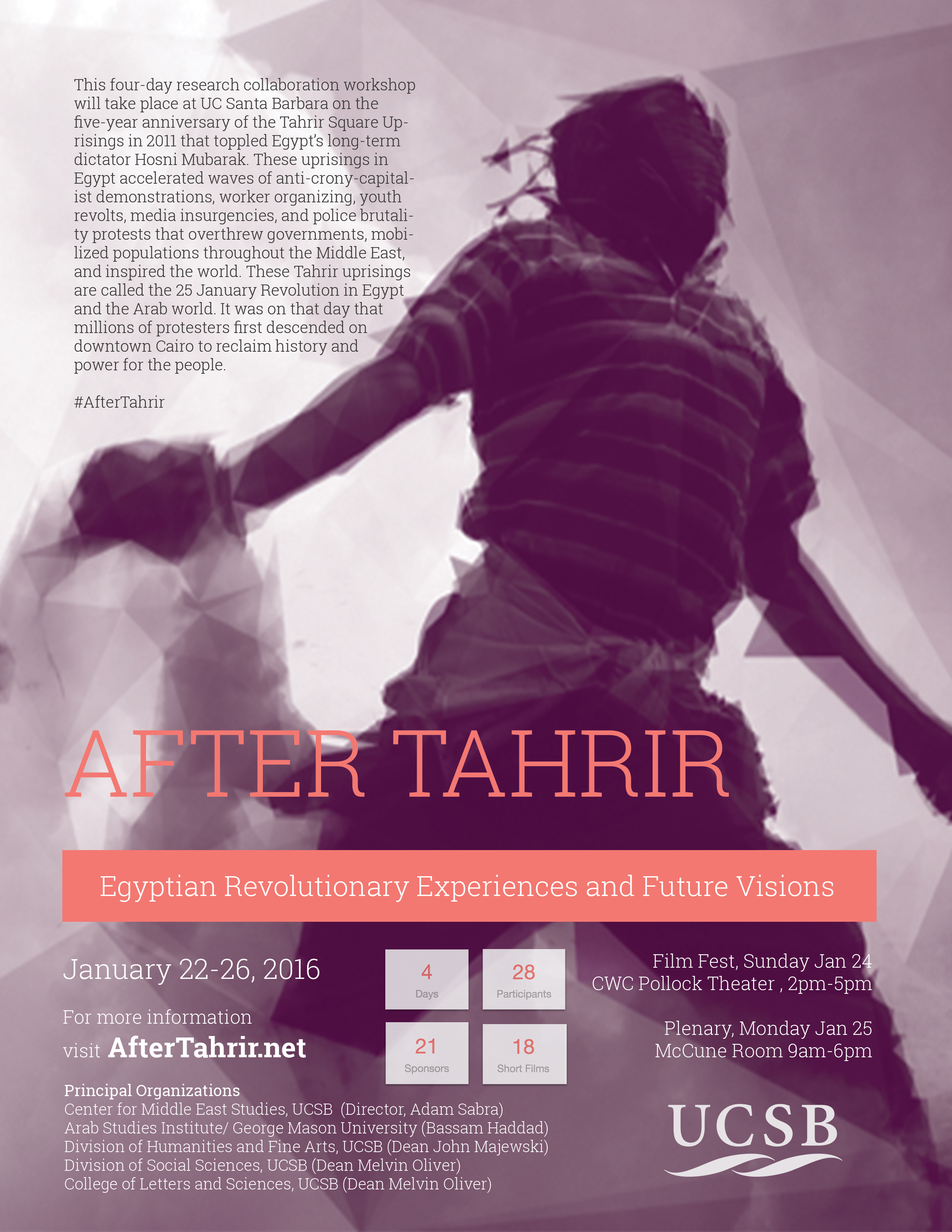 This four-day research collaboration workshop will take place at UC Santa Barbara on the five-year anniversary of the Tahrir Square Uprisings in 2011 that toppled Egypt’s long-term dictator Hosni Mubarak. These uprisings in Egypt accelerated waves of anti-crony-capitalist demonstrations, worker organizing, youth revolts, media insurgencies, and police brutality protests that overthrew governments, mobilized populations throughout the Middle East, and inspired the world. These Tahrir uprisings are called the 25 January Revolution in Egypt and the Arab world. It was on that day that millions of protesters first descended on downtown Cairo to reclaim history and power for the people.

The Egyptian uprising was one global turning point in the history of repression. Immediately following the January 25 Revolution in Egypt, at least fifty-eight countries around the world passed draconian laws to restrict or fundamentally cripple the right to protest and occupy civic space. Government in ostensibly “democratic” regions of North America, the European Union, and Latin America ratified repressive dictates. They also developed and deployed new apparatuses of surveillance and criminalization against those using the internet as one site of many for civic opposition. In the past five years after Tahrir, many of those who comprised this electrifying “2011 Generation” of human rights defenders and youth civic leaders have been fined, beaten by police, and arrested. In this challenging and historic context, in late January 2016, a uniquely talented group of human rights defenders, scholars, and activists will converge at UC Santa Barbara to reimagine the shifting fabric of neoliberalism, the imperatives of popular sovereignty, the challenges of gender/sexuality/race justice in the context of repression, and the cultures of authoritarianism that are shaping our times, globally.

On Sunday afternoon from 2pm-5pm, the After Tahrir conference will also feature a series of film shorts, new media projects, and video installation in the Michael Douglas Lobby at the Pollock Theater. Award-winning filmmaker Omar Robert Hamilton, internationally acclaimed curator Sarah Rifky, and media artist Heba Amin are among the conference participants who lead a lively discussion after the programming of video-clip artists and community based street videographers. The film and media collectives represented in our program include Kazeboon, an awareness and critical media collective in Egypt that documents and screens videos and films of military authoritarianism in public sites; Mosireen, a non-profit media collective in downtown Cairo born out of the explosion of citizen media during the revolution; R-Shief, a media system that collects, analyzes, and visualizes social media and holds one of the largest repositories of Arabic-language tweets, including content from the 2011 uprisings and Occupy movements; and a series of videos vignettes from “Democracy Dialogue” with Mohamed ElBaradei and Rajmohan Gandhi. All of the works featured in the After Tahrir conference series have emerged out of or tell stories in light of the revolutionary moment in Egypt. Audience will join filmmakers Heba Amin, Omar Robert Hamilton, Wael Iskander, Sarah Rifky, and Laila Shereen Sakr of the Department of Film and Media Studies for a post-screening discussion.

From 9am-6pm on Monday, we will hold a public plenary in the McCune Room in HSSB. The panels held are on the following topics: “What is After Tahrir? Revolutionary Experience and Future Visions,” “Revolutionary Time: On History, Memory, and Temporality,” “Morbid Symptoms of Rule: the Invincible State, the Vulnerable State,” “Radical Democrats and Legacies of Combat: Strategies and Movements,” and “Bodies and Spaces: Moral Panics, Revolution, and Counterrevolution.” Please visit our website for a complete program schedule.

The three organizers of After Tahrir are three scholars most intimately connected to Egyptian civil society and to this generation of human rights defenders, media and film makers, techies and activists. These organizers/activists/scholars are UCSB Professors Paul Amar (Global Studies), Sherene Seikaly (History), and Laila Shereen Sakr (Film and Media). This dynamic program is made possible by the generous support of the Center for Middle East Studies, UCSB; Arab Studies Institute, George Mason University, UCSB Division of Humanities and Fine Arts,UCSB Division of Social Sciences, UCSB Colleges of Letters and Sciences, the Carsey-Wolfe Center. We are tremendously grateful for the wide reaching support this event has across the UCSB campus. Thank you for the support of UCSB Endowed Chairs: Adam Sabra Michael Curtin, Eileen Boris, Janet Afary; and to the following UCSB Centers: Interdisciplinary Humanities Center, Multicultural Center, Center for Work Labor and Democracy, Center for Cold War Studies and International; and to the following UCSB Departments: UCSB History Department Film and Media Studies, Global Studies, Computer Science, Chicano Studies, East Asian Languages and Cultural Studies, Sociology, and Political Science. On behalf of the organizers and sponsors, please join us.